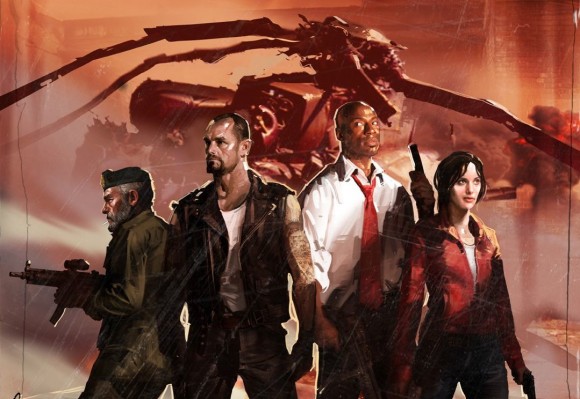 This is a story about dads and sons, parenting a teenager, changing interests, and, of course, zombies.

My oldest son is now 15 years old.  We've had an excellent relationship ever since he was just a little tyke.  When he was a preschooler, we watched hours of Power Rangers together.  When he began school, it was comic books.  All along, video games have been a big part of our lives together.  My son was the best Gauntlet Legends partner, Smash Brothers teammate, and all around co-op champ you could ask for.

You'll notice I said "was".  Unfortunately, as the hormones kicked in, we've grown a bit distant from each other.  This has been difficult for me, as we were so close in the past.  Instead of watching giant robot anime, he's doing homework.  Texting on his phone has replaced playing Magic: the Gathering together.  Worst of all, video games have been replaced by... you guessed it: girls.

Our play time together has all but disappeared.  Most of the time, my co-op is done with my youngest son, who, at 8, still thinks dad is the coolest.  But there are some games that just aren't appropriate for him.  Namely, Left 4 Dead.

I've been itching to play the Crash Course DLC campaign since it was released.  But it seemed like something always kept me and my oldest son from having any time together.  A track practice here, a big English essay there; don't even get me started on the telephone conversations with his girlfriend.  Finally, after weeks of delays and interruptions, we had an hour to ourselves last night.  Mom took a shower and watched TV in the other room, little brother happily watched a DVD on my computer, and big brother and I sat down on the couch for a session of the latest Left 4 Dead goodness.

We were both a bit rusty, as it had been so long since we had played.  I always play as Francis, he always chooses Zoey.  When we grabbed the weapons and heard the characters talking to each other, it was a great feeling, a bit like putting on an old comfortable pair of jeans that you find at the bottom of your closet.  Our time away from Left 4 Dead had made the experience all the sweeter. Crash Course plays a bit differently from the other campaigns.  The most notable difference was all the platforming elements.  In many different areas, you have to hop around various structures.  You might jump across a tractor trailer to a rooftop, for instance.  There are lots of bridges and abandoned train cars, especially in the finale.  These jumping sections add a real sense of danger and excitement to me, since I'm not as good at the "twitchy" stuff as I used to be, and I'm always falling off of things.