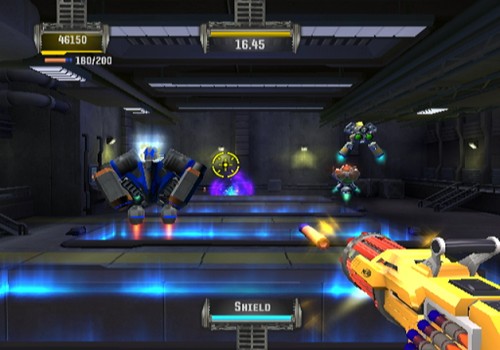 As you would expect, Nerf N-Strike is very kid friendly.  All of the violence is of the foam variety.  You never shoot each other even, which is a bit odd, considering I've been pelted by Nerf Darts in real life quite a bit.  Instead, you face mostly robots, of various types.  All of them are about as non-humanoid as you can get.  Clearly, they were going for a game no one would find objectionable.  This "nerfing" of violence didn't bother me in the least, though I found myself wishing I had a Nerf chainsaw attached to my blaster.

The game is colorful, and shiny; the whole experience is like Crayola meets the 70s version of Battlestar Galactica.  Lots of metal and corridors are everywhere, bright lights all over the place.  Numbers showing points values fly across the screen at a good rate, all in glorious rainbow colors.  Graphically, the game is adequate.  Nothing extremely fancy is on display; on the other hand, there was very little slowdown in framerate that I noticed.  I did find myself wanting to see the bright shiny graphics in high def, as I'm sure they would pop off the screen.  Like most Wii titles, colors are a bit washed out.  That's a hardware issue, though, and the developers can hardly be faulted for that. 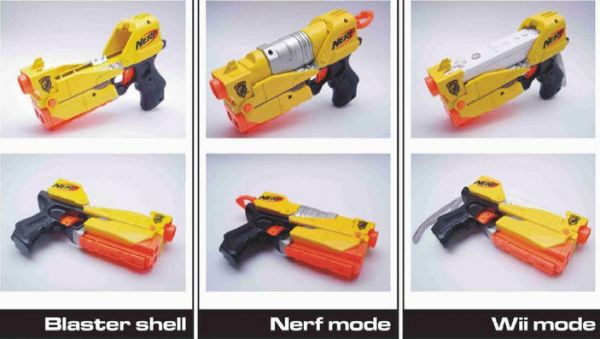 Nerf N-Strike comes with a super nifty Nerf gun you can plug your Wiimote into.  This is obviously a great idea, and makes the total package just that much more appealing to the 8-12 year old crowd, or those who simply act like they are 8-12.  The gun feels good in your hand, and while the nunchuk is not required for Nerf N-Strike, it is compatible with it.  This little bonus was much appreciated.  While playing, we used the N-Strike gun, the Wii Zapper, and two regular Wiimotes.  The N-Strike was by far the best control method, and I am seriously considering picking another one up, since they are sold separately.  Many different Nerf weapons are available in the game, though most are locked at the beginning.  Each has a different rate of fire, accuracy, and sometimes even different ammo.

For the rest of the review, I'll focus on the multiplayer components of the game.  I didn't play it myself, but I've heard the single player campaign is surprisingly lengthy, based on scoring more points than computer opponents.  That's all well and good, but Nerf N-Strike was clearly meant for several people to play at once.  The majority of the multiplayer modes allow for four players to play simultaneously.  There are six modes available, and a handful of variants for each mode.  Points are calculated per player, and a "winner" is declared each round, but many of the game modes feel quite cooperative nonetheless.  Think of it as the "competitive co-op" some games feature.  Let's take a look at each mode from the co-op perspective. 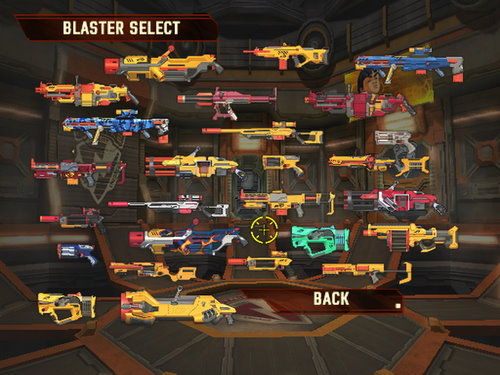 Spheres:  Large groups of metal spheres appear on a wobbly platform.  Variants include destroying as many balls as possible, to guiding them into your goal.  This mode was a bit more enjoyable, since everyone plays at once, but felt too cutthroat to be enjoyed for long periods of time.  Still not co-op.

Sniper:  The object of this mode is to shoot robots, but not indiscriminately.  Each round, a color is called out, and players shoot only robots of that color.  Colors change between rounds, which really makes this a concentration exercise.  Co-op feel is better, here, since there is a feeling of "us vs. the robots", but still, its mainly about scoring points for yourself.

Revolt:  This is an "on the rails" mode, where the players are taken through a series of corridors to repel robot invaders.  A nice variety of enemies and sections where you change weapons make this one a keeper.  Replay value is a bit low; I'd like to have seen new weapons unlock if you met certain conditions, which would make me play it more.  Still, it's a good time and is quite co-op in feel since players share a shield/life bar.

Onslaught:  Now, we're talking!  Players start in an empty room, and as tunnels open up, dozens and dozens of robots come hurtling your way.  Players share shields, as in Revolt, and with so many enemies coming at you, cooperation is essential.  You'll find yourself calling out what side of the screen to cover, when you're reloading, etc.  As far as the co-op feel goes, Onslaught mode is Nerf N-Strike's king.

Blockade:  This just might be the best mode in the whole game, though.  Players take turns shooting a huge pile of blocks.  There's a real Jenga feel to it, similar to Boom Blox.  Blocks disappear or explode when shot, and some truly impressive reactions often result.  While it isn't as fast paced as Onslaught, and less co-op in feel, it is certainly fun and when the special block is shot, blowing up the entire tower, now a pile of wreckage, you won't really care who got the kill shot.  We found ourselves playing this game mode the most.

Nerf N-Strike is simple, and easy to pick up.  Many of the game modes are quite compelling.  The recent price drop, plus the inclusion of the real Nerf blaster that doubles as a Wiimote accessory, make the game a good value.

The Co-Op Experience: Several game modes allow players to work together toward a common goal. One has players shooting rovots and sharing a shield bar, and another has players take turns destroying blocks, similar to a puzzle game.BackgroundN-Strike comes with a real, working Nerf gun with a detachable barrel. You can plug your Wiimote in when you play the game!