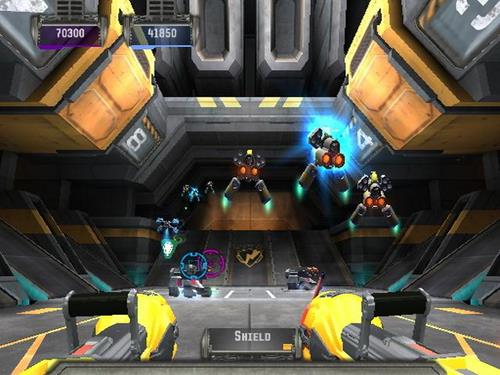 This week on Casual Friday, we'll take a look at several games, all in the same genre.  Each of these games are for the Wii; Nintendo's console is a fine choice for casual gaming, though certainly not the only option.  The unique capabilities of the Wii remote have led to something of a renaissance in an old, but dearly beloved game type: the lightgun shooter.  We'll look at several examples of Wiimote shooters today in our quest for the best co-op title in the lot.

One of the first things a non-gamer will say when you hand them an Xbox 360 or PS3 controller is "what do all these buttons do?"  It can be overwhelming to say the least.  Consider the Wiimote, though.  The pointer motion is quite natural, and easy to understand.  There are lots of buttons, yes, but A and B are much larger and more prominent in a tactile way.  The device is a perfect fit for the simple point and shoot philosophy of lightgun games, and Nintendo obviously knows this. Wii Sports may be the first game everyone shows to their non-gamer friends and relatives, but Wii Play is likely going to be the second.  Everyone has it, of course, since it costs only $10 more than a Wiimote alone.  The first game in Wii Play is a modernized version of Duck Hunt called Shooting Range.  Easy as pie to learn, and a ton of fun to play even for the more accomplished gamer.  However, it isn't co-op!  There's only so many times you can obliterate your father-in-law's score before he'll want to move on to another minigame.  Thus, we have to look elsewhere for our co-op Wiimote shooter fix. I thought I had found a good one when I played EA's Playground.  Most of the minigames are either extremely easy or an exercise in how not to use motion controls, but there is one game mode that stands out.  Dart Shootout is an on the rails shooter where you use a gun which launches strangely familiar foam darts.  Your targets?  Other children on the playground!  As a teacher, I found this game to be quite cathartic.  Scoring is kept individually for each player, but you'll likely end up cooperating.  At the end of the level, a big boss bully comes out, and shortly thereafter, he looks like a rainbow colored porcupine.  There's a great concept here, but it is so short, and just repeats itself, that you'll want to look elsewhere for a full fledged shooter experience. When Wild West Guns was released, I thought it was the experience I was looking for.  The game, available on WiiWare, is easily better than the games we've mentioned so far.  Two player co-op makes the game truly stand out, but the repetitive levels really drag it into the depths of "meh".  Once you figure out the key to the scoring (misses are unacceptable, it's better to shoot less and not hit everything on the screen), the game is trivial.  However, this odd scoring goes against your natural inclination to draw and shoot as fast as possible.  No, there has to be something more fulfilling, a well designed, fun, easily accessible game where the Wiimote's capabilities as a lightgun are used effectively. I believe I have found that game: Nerf N-Strike.  In my admittedly brief time with the game, I am convinced it is the best Wiimote shooter available, and indeed one of the best casual games you'll ever play.  The Nerf universe is colorful, kinetic, and fast paced.  There are six game modes available, and each mode has different variations.  Some of them are more co-op than others, of course.  In one co-op-feeling mode, players share a common shield bar as they go through a series of hallways shooting robots.  In another, puzzle-like variant, players take turns shooting blocks, revealing the explosive block that will destroy them all and give the most points.  Another enjoyable mode was one where players are attacked by wave after wave of drones, reminiscent of Galaga or Space Invaders.  Technically, players are competing for high scores in Nerf N-Strike, but cooperative tactics are absolutely necessary.  My wife found the game impressive, and that is truly saying something.  She even demanded that I hand the Wiimote over at one point.

I must mention one absolutely brilliant twist to the game.  It comes bundled with a Nerf gun; yeah, an actual Nerf gun, with darts and everything.  The barrel of the gun can be removed, allowing you to slide your Wiimote in to use in the game itself.  I can tell you from personal experience that this feature is a real kid pleaser.  As a matter of fact, even those who are merely young at heart will find this bonus quite fun.  I found myself swapping barrels between rounds and shooting the cat, or even my son when he beat my score.  All in all, Nerf N-Strike is a great co-op experience, and the very definition of a Casual Friday game: easy to use controls, low learning curve, and very kid friendly in every way.  If you yearn for the days of the NES Zapper, you might just want to check Nerf N-Strike out.  Just make sure you buy enough extra ammo!