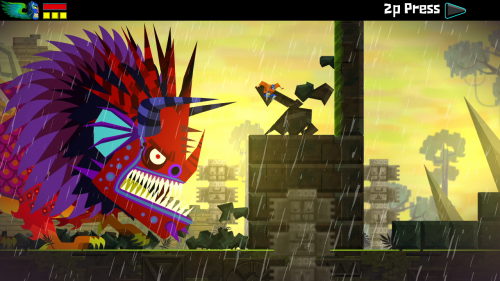 April has been, and will continue to be, a good month for co-op gaming. Unfortunately, the choices are a little slim this week. I guess I should say "choice," because there's only one co-op game coming out. At least it looks good.

Guacamelee! (PSN, VITA) A self-proclaimed Metroidvania-style game which features strong brawling elements. You can play as the luchador, Juan Aguacate, or woman known simply as Tostada. Players can shift between two worlds, adding a new dimension to the gampelay. Check out the launch trailer. 2 player local co-op

There are no retail releases this week. Amazon has a few games listed for April 9th, but they really come out on the 15th. Hey, we all make mistakes. That Double Dragon 2 remake game came out last week, and I thought it was a figment of Raines' imagination. Stuff happens.