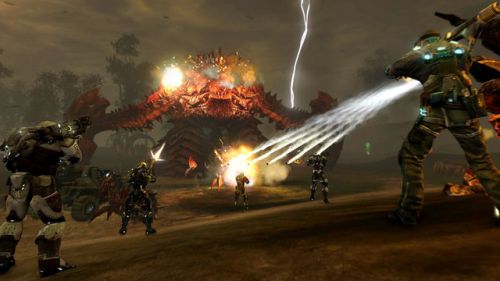 We’re only a week into Defiance’s release and there’s lots of talk about fixes that need to be addressed. The Trion World’s Twitter account seems to be where most of the public is voicing their concerns, abuzz with server concerns and lag issues. Rest assured Defiance players: Trion Worlds is taking note and is hard at work to buff out the rough edges of the game.

The developers are working rapidly to get things running smoothly again, all to begin moving forward with the intended batches of DLC to come. Thus far, they are putting forth their efforts in order of gameplay importance:

These are the major concerns with Defiance’s gameplay issues currently and have been immediately addressed through Trion World’s community page: There will be a patch within the next week (possibly April 15th) that will address some of the more problematic issues, such as lag, visibility, and signal to noise ratios, with another appearing about 2 weeks after that. These, however, will push the DLC back a bit due to the amount of fixing that has to be addressed. The good news is that we’ll be receiving 5 different DLC bundles, all with free and paid components to them (i.e. new playable races will be purchasable, but not features).

Stay patient folks! Next week, the Xbox certification process should be done and set to make the 1st patch hit LIVE.