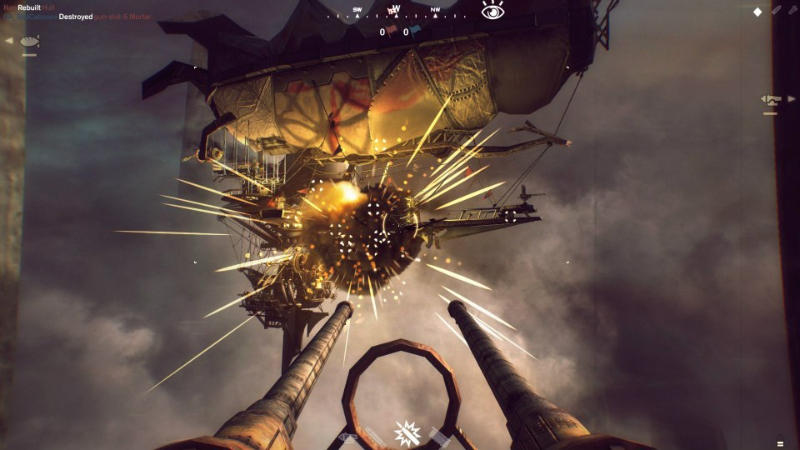 It seems like only yesterday that we brought word of Guns of Icarus Online's latest Kickstarter campaign, this time to expand the game beyond its current Skirmish/PVP mode into the realm of PvE and co-op. As of yesterday, Muse Games has hit their Kickstarter goal, which is good news for all of us. Meeting that goal means that the New York based developer can begin in earnest to develop and release the "Adventure Mode."

As previously discussed in our previous news posts, the main feature that this new mode introduces is an A.I. Director to control the enemy ships you'll face instead of the usual human-controlled fare. This means that you're no longer forced to face off against other players in an all out brawl where you'll possibly be called names that are inappropriate to type here. And that's just what you'll hear from your teammates. Now you can collect a crew of your favorite friends (potentially up to 16) to sail the skies, take on missions, and tackle A.I. foes both normal and large (they've mentioned boss battles) in this forthcoming update/expansion.

While the initial goal has been reached, Muse is hoping some additional funding will come their way to hit some of their stretch goals. These goals would add more depth to the world they're creating and introduce what they're calling a "Econo-Political System". Basically, accepting missions from the different factions in the world will net you some influence with them and enmity from others.

The game is well done and there's certainly a strong sense of cooperation to successfully guiding your ship through the battles, but the requirement that everything is PvP has put something of a hamper on the atmosphere for us. Hopefully this new PvE mode will be the kind of co-op for which we've been looking.

Oh, and enjoy some Kenny Loggins.