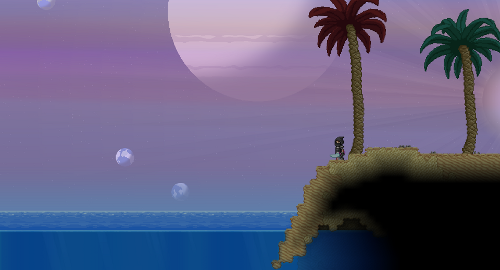 The team at Chucklefish is still toiling away on the Terraria-like sandbox game Starbound. Pre-orders opened up in mid-April and have been a rousing success, bringing in over $1.1 million from almost 50,000 future players. That's a lot of funding, especially for a small indie studio, and it bodes well for the future of Starbound.

Chucklefish recently teased some new additions to the game. For starters, the list of craftable armors has been completed, bringing the total up to 60. That doesn't include costumes, clothing, or dying the materials different colors, so fashion choice is one area that won't be lacking. Shields are also new, giving you something to duck behind when enemies are attacking. It's going to cost you some energy to hide behind them, though, so don't make it a habit to sit there like a turtle.

Traveling to other worlds is one of the more exciting parts of Starbound. Those planets now appear in the night sky while you're playing. And they're not randomly thrown in there, either. The planets you see are the planets you can visit. How's that for exploration? You'll also encounter a brand new biome: frozen ocean. The frigid environment is full of deep waters with small ice islands floating on top. Bring a parka.

Starbound is scheduled for release by the end of 2013 for PC, Mac and Linux. Online co-op for at least eight players has been confirmed.