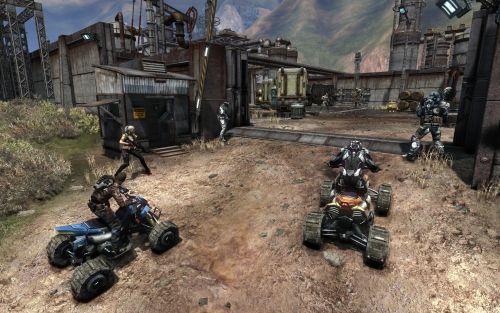 Defiance is free to play on Steam this weekend. Trion Worlds' massively multiplayer third person shooter is still plugging along. The game has received numerous patches since launch, so if you haven't played it since the free beta back in March you might want to check it out. The free trial will last until 1PM PDT Sunday, May 26th. That's more than enough time to shoot some aliens and earn some decent scrip.

Players will also be treated to a few missions that are tied directly to the Defiance TV series. In the two week span between the launch of the game on April 2nd and the debut of the pilot on April 15th, there were a handful of episodic missions starring Nolan and Irisa, two of the main characters from the show. Once Defiance debuted on the Syfy network they were no longer available. This weekend you can play those missions, which act as a mini-prologue. If you complete them you'll also be rewarded with some fashionable outfits, and isn't that what MMOs are really all about? (If you've already finished these missions they will not be available.)

Steam is also having a sale on the full copies of the game. The Standard Edition and Deluxe Edition will be on sale for 30% off, making them $41.99 and $69.99 , respectively. You can also watch every episode of Defiance this weekend. All six episodes will air back to back on Monday, May 27th from 4pm-11pm on Syfy. I've been watching the program since it debuted with my wife. After a decent first episode we think it has gotten progressively better. It's very space western, and Nolan was particularly badass in this week's episode. It's also been renewed for a second season.

On the game front, new DLC which will add a new playable race (among other things) has been announced. Tentatively titled, "Rise of the Castithan," it will feature free and paid content, as well as a store update. Defiance's enthusiastic executive producer, Nathan Richardsson, outlined the DLC in a recent post:

You can buy these individually from the store:
– New Mods that tint the color of your Castithan Blade
– Lockboxes have a chance to get Charge Weapons
– More versions of the Raptor, the new 4 player truck of doomed compensation
– Character Customization changes: Appearance change, name change, or everything change

Defiance is an MMO and supports massive cooperative battles in the open world. Players can form smaller groups of four to complete co-op missions. It is available now on the Xbox 360, PlayStation 3, and PC.