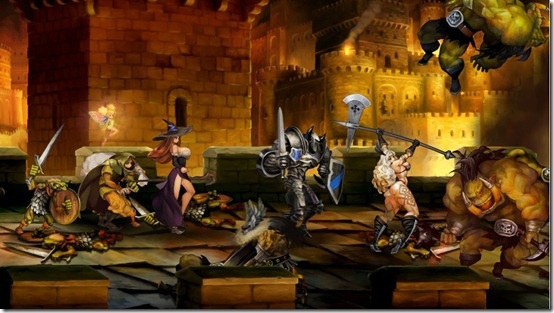 Like so much warm dragon-made honey (note: fact check that before publication... maybe), Atlus has released a delicious tidbit of news for its upcoming Vanillaware-made brawler Dragon's Crown. Players who grab the game during the first month after launch will have free access to the voice pack DLC, a cosmetic add-on that allows you to swap the narrator's voice with the voices of any of the six playable characters. After a month has passed the DLC will cost $1.99, which isn't very much, but we'll take every freebie we can get.

Dragon's Crown has turned a lot of heads in recent months thanks to its particularly stunning artwork. Stunning, and somewhat controversial in some circles. Either way you have to admit those sprites look great. A week or so ago some custom tarot card images were released along with character portraits and wallpaper images just to remind us how good everything looks. And as the gameplay videos prove, Dragon's Crown doesn't lose any of that luster in motion.

Dragon's Crown is set for release on PS3 and PS Vita August 6th. It will support four player co-op play both locally and online.