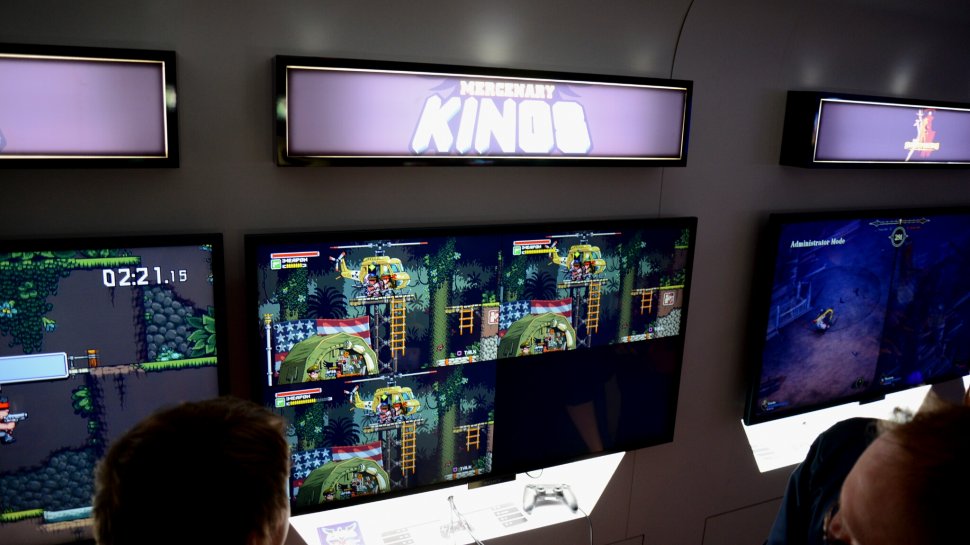 Nick and I snaked our way through Sony's overcrowded booth. Well, it really wasn't a booth - it was more like an impressive display of dominance. It was bigger than Microsoft's show floor, and it seemed to have many more games on display than Nintendo. Sony's E3 offerings were laid before us. The only thing separating our eager hands from our sweet, sweet next-gen experience was a thousand other event goers with the same hopes, dreams, and inflated expectations.

We avoided the huge line for The Last of Us (it comes out in three days, people, get a hold of yourselves) and wound our way to a staging area where several of the PS4's recently announced indies were on display. I saw Mercenary Kings, spotted the four player split screen, and decided to jump in.

The Kickstarted 2D side-scroller is yet another game which is blending genres. It features running, gunning, stabbing, looting, and crafting. Visually, the game is very reminiscent of the Metal Slug series. Four players can play the game either locally or online. Nick and I played a quick match together in which we had to track down a mechanized boss in a set amount of time.

We were playing with Tribute Games' Jean Francois Major, who suggested we split up to locate the boss. The three of us went in different directions. The split screen gives local players the same freedoms of online play, allowing us to strike out on our own. I soon found the mech boss (it reminded me of the battle suits from Avatar). I dished out some damage, but it retreated after a few minutes, only to respond elsewhere in the level. The mini-map showed its new position and we made a mad dash toward our prey, quickly dispatching the grunts who got in our way.

The gameplay is solid. Our little dudes (and dudette) featured tight controls. The PS4 controller felt new, but familiar. The "touch pad" is actually a big button which we used to bring up a map. The boss would spawn in a certain location and we'd have to fight our way through a variety of enemies. "Doorways" would allow us to move between the two different layers of the map.

The spite-based enemies were rather colorful, and it was disconcerting when a fountain of blood spurted from the neck of a soldier when I blew his head clean off. All's fair in love and video games, I guess. An active reload mechanic takes some getting used to, but I enjoyed shredding my enemies with my burst fire assault rifle and sticking them with my darling little knife. Pixel violence is weird. A glimpse of the crafting screen.

The blood-spurting soldiers would drop a variety of raw materials. These items could then be used to craft more deadly firearms and knives. When not on a mission, players will be able to buy and create new items in an interactive camp. Mercenary Kings will feature hundreds of items, allowing for a multitude of combinations.

The one thing little thing I found irksome was the fact that if you play with two or three players in local co-op the remaining screen will be blacked out to maintain aspect ratio. I wish they'd use that space for something a little more useful, like mini-map, but that's the way it is for now.

Mercenary Kings supports four player local co-op and four player online co-op. A closed beta will begin for their PC Kickstarters later in July. Tribute Games hopes to have the game ready for a PS4 launch.