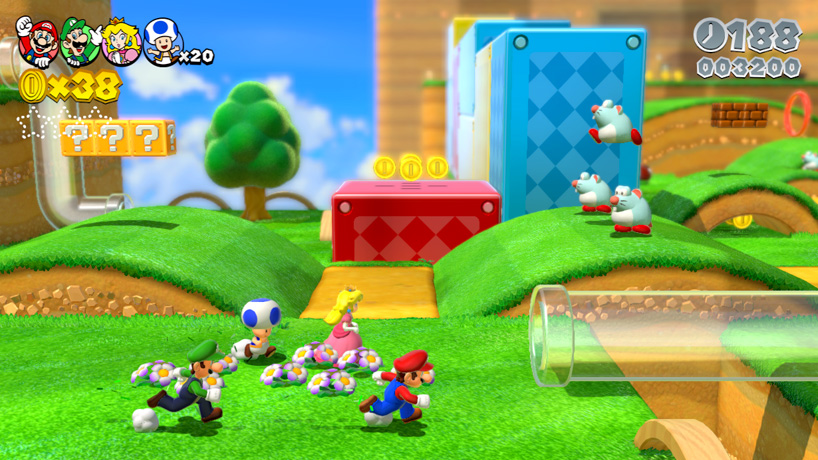 With the success of Super Mario 3D Land on the 3DS, Nintendo saw it fit to release a sequel for the title called: Super Mario 3D World. Among the wide variety of games shown off at Nintendo’s E3 press conference this morning, including Mario Kart 8 and Super Smash Bros. Wii U, we know for sure that Super Mario 3D World will boast a 4-player co-op mode.

Think of the game as a mash up of many of the famed Mario titles we’ve come to know over the years. Players can take control of 4 different characters: Mario, Luigi, Peach, and Toad, all with their own unique abilities (reminds me a lot of Super Mario Bros. 2, actually). If you are a fan of the New Super Mario Bros. series or any of the most recent Super Mario 3DS/DS titles, this should be a no brainer come the holiday season. Players work together to complete levels, but also compete with each other to collect coins and power-ups to get the high score.

No word on if players can join up online to play with their friends just yet, but give it time and more information is sure to come out about this. For now, we can stick to our normal 4-player local co-op mode we are accustomed to. Here are some of the main features that will be included so far: One of the big reveals here was the ditching of the familiar Takuni Suit in favor of a new power-up that grants players feline powers, such as climbing up walls and goal posts or pouncing enemies with aerial attacks or slides (nimbly, bimbly).

Super Mario 3D World will be releasing for the Wii U only by December of this year.