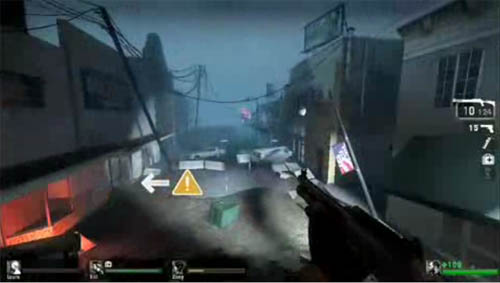 The folks at 1UP did their homework in gathering some information about upcoming downloadable content for Left 4 Dead.  Valve writer Chet Faliszek discussed the future of Left 4 Dead on a recent Kotaku podcast and revealed that an announcement and details on L4D's DLC should be coming soon.  In fact, soon was said to be around Christmas, which has since come and gone.  So like everything Valve, it appears that announcement has gone late.  We expect to hear something soon on some juicy co-op content.

The best news to come out of the chat was the fact that Xbox 360 owners would be getting the content around the same time as PC owners.  This hasn't been the case with Valve's other 360/PC game Team Fortress 2.  And there was much rejoicing.

Hopefully the content doesn't come with a patch to fix the following glitch, because frankly, I can't wait to launch myself at a horde of unsuspecting zombies.  How am I going to do that?  Watch the video and see.

Gives a new meaning to the words...INCOMING!!!!