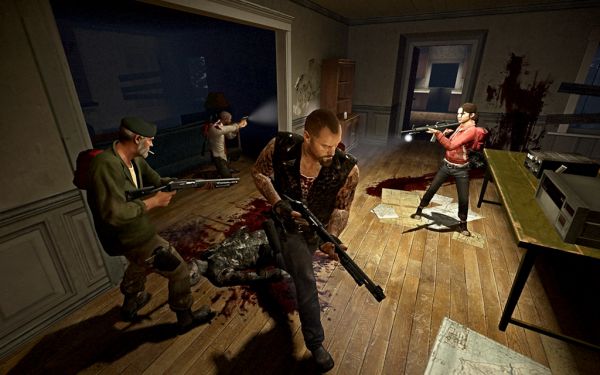 Left 4 Dead was covered in January by Blake "broodax" Corner, a previous staff member and current student with over 100 news posts to his credit. Seven months later, Co-Optimus is still rockin' Left 4 Dead as a solid and fun co-op title. Monday night, I took my younger brother for a spin through the No Mercy campaign for some Achievements and bloody survival mayhem.

Previous to Monday, I hadn't played Left 4 Dead in a couple of months. Leave it to a period of busy "real life" to help you forget the hot Tank spawn areas or how best to limp across a crowded street to the Emergency Room... To say that some surprises were in store for me would be an understatement; I found myself holding my breath again, a terrified habit that hadn't vexed me since the first time that I'd played the demo with Nick and Mike. Severed limbs...blood smears...the hiss of the Smoker...it was all refreshed to me, and appealed to my senses in the way that makes the gamers come back for more, no matter how sadistic it seems to be. An early screenshot, before Louis was introduced

As I scooped up a shotgun and grabbed a health kit, the passing Huey helicopter kicked off our return to the city of infected. Out of instinct I knew to step back after opening the roof door -- just in case that first gurgling, walking corpse wasn't waiting on the other side. My gung-ho brother, however, felt it necessary to charge down the stairs without a care, adding a whole new level of compulsiveness to the already-deep character Bill. Laughing at his impetuous assault, I growled a whiny, "I hate zombies!" into the Live headset boom mic. Yes, that's right: I was playing as Francis.

Fortunately for my not-so-steady nerves, we had a motive ulterior to the usual bloodbath: we were both on a mission for the Cr0wned and Akimbo Assassin Achievements, as well as any progress on Red Mist or Zombie Genocidest. It provided a nice distraction (and kept the I-now-have-wet-shorts moments to a maximum of three instances). After realizing that Akimbo Assassin required a complete playthrough with no stops, we settled for Cr0wned, and whatever else we could muster up. In the meantime, we had to survive. Shockingly, we made it through the majority of No Mercy on moderate difficulty ("Hard") without too many issues. Despite getting Boomer-slimed at least three times each and getting pummeled with random Hordes, two Tanks, and three Witches...we didn't do so bad. I Cr0wned the third witch successfully (although the Achievement only requires one well-place shotgun blast, I fired five times in a completely reactionary frenzy), and my brother secured some Gamerscore points for healing and giving pills to our AI accomplices.

With the Left 4 Dead sequel bearing down on us, I had considered getting some credit for the original, as I've already beat the campaign several times and don't care for the versus mode. I'm glad that I haven't, however, because although I may miss my opportunity to get some decent trade or resale value, the game gets better with age. Maybe it's the controversy surrounding Left 4 Dead 2...maybe not. Whatever the reason, my re-invigoration has taught me that the politics that surround a game can detract from its original purpose and the motive by which you first played it: it's just plain, pure, incredible fun (even without iron sights).