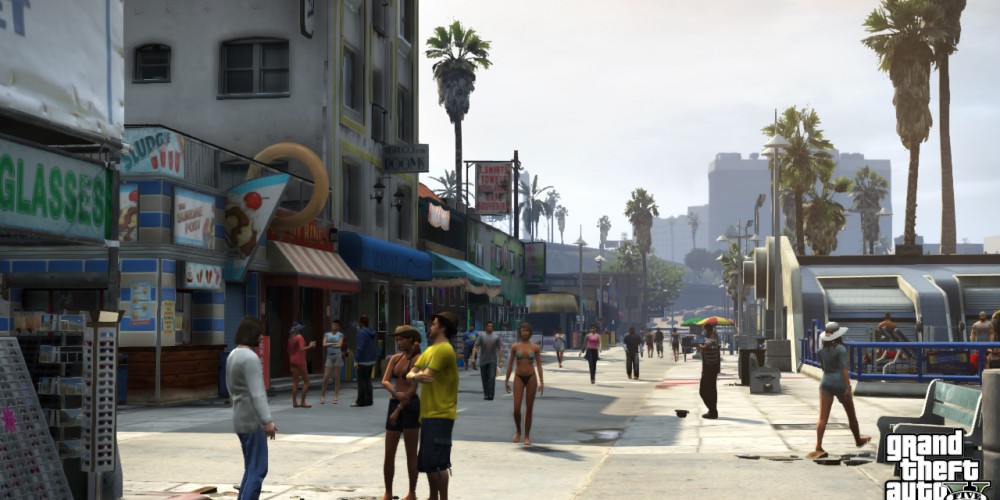 The Grand Theft Auto V video finally revealed a multiplayer component! Great. Now I can cover it. The big gameplay trailer debuted yesterday. Here it is, in all of its "look at all the s*** you can do" glory:

I think it comes off as more of a slick presentation by suits to potential investors than a fun ad for digital escapism. The adult approach works for me, and from the internet buzz it works for most people. Of course, if I shot a video of grass growing and slapped an official GTAV logo on it I'm sure I'd get plenty of people fawning over the grassiness, or the greenness, or whatever.

Full disclosure: I have never been fond of the series. I loved Red Dead Redemption, but the GTA magic has no power over me. I'd rather play a game that does a few things very well rather than a lot of things passably. But this five minute feature piqued my interest, mostly because it looks like Rockstar has greatly improved the gunplay. Kudos.

I'm sure there are dozens, if not hundreds of breakdowns of this trailer available online right now. I'll cut to the chase with this officially unofficial Co-Optimus breakdown rant:

Why isn't this a cooperative game? I saw the nine potentially amazing seconds of "Grand Theft Auto Online" --and I'm looking forward to hearing more about that-- but what about the main campaign? Are you seriously telling me a single player is going to juggle control of three characters? This game better have the best friendly AI ever made. It will have to be a huge improvement over anything that's ever been produced in this console generation. Because right now, GTAV is conjuring up worried visions of the AI of Lost Planet 2, Fuse, and The Last of Us.

Will the AI be broken like in LP2? Will players have to constantly babysit their CPU-controlled allies? Fuse allowed players to jump between characters, just like we see in this new trailer, (albeit over a much larger scale while not on a mission) but that was a poor substitute for another player in a firefight. The friendly AI in the outstanding The Last of Us was only viable because enemies usually ignored your clambering partner most of the time, which trampled all over player immersion. You know what solves these problems? Human players. They're pretty damn good at playing like a real person.

I have yet to see a game provide a reliable AI partner. Some have come close, but there are always a few glaring "WTF was it thinking?" moments. Rockstar is one of the best studios in the industry, and I truly hope they can pull it off. I know it doesn't really matter. We're going to buy GTAV anyway. I'm just trying to figure out how much we're going to bitch about it later.

Grand Theft Auto V launches September 17th on the Xbox 360 and PlayStation 3. Online multiplayer has been confirmed, but there's no hard player count, yet. I suspect it will be a mix of co-op and PVP similar to Red Dead Redemption. We'll keep you posted.