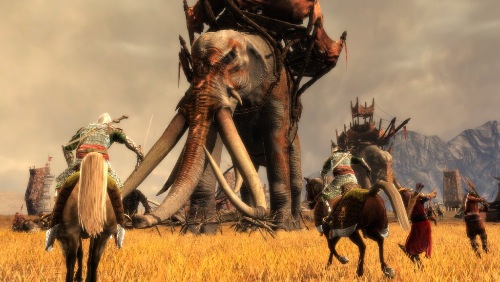 Ever since our in-depth preview that included some hands-on time by Mike, our hopes have been high for Lord of the Rings: Conquest. Even though Pandemic apparently removed two players from the four-player co-op campaign, Pandemic's last two battlefield-style outings -- Star Wars Battlefront and Battlefront II) -- allowed enough AI on the playing field at one time that players could band together and play multiplayer matches as co-op partners. Conquest looks like it will be no different: the Live page for the game indicates that up to four players can play splitscreen.

The game officially ships January 13th, but until then a multiplayer demo is available right now on Xbox Live. Although the demo does not showcase the co-op campaign (doh!), at least you can swing your sword a few times and see what the fuss is about before laying down your hard-earned money.

It's already in my queue. Gotta love the new XBLM web interface!

UPDATE: Apparently, the demo was released over a week ago on the Playstation Network as well.