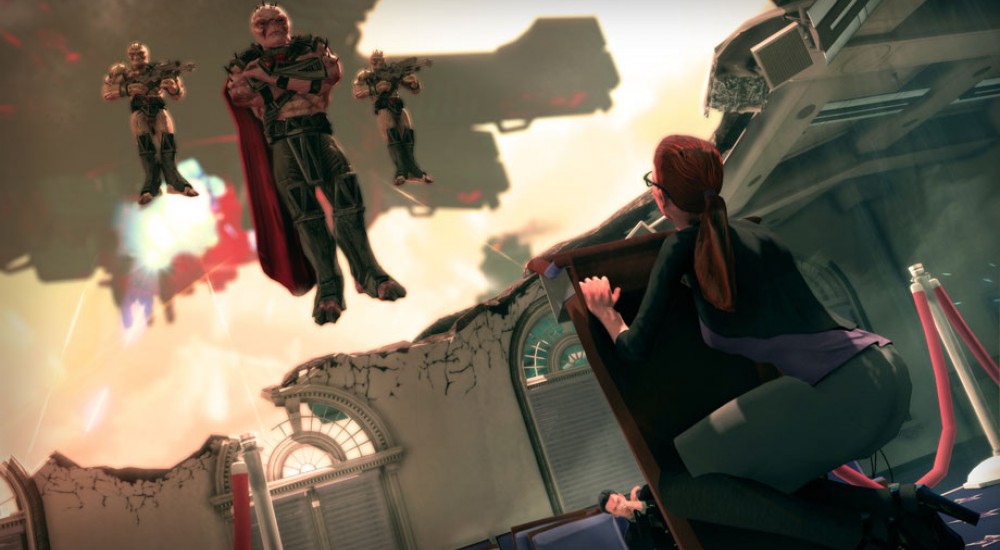 Saints Row IV. It's coming. You're either going to love it or hate it; it's just a matter of what you consider "fun." I've spent about a dozen hours in the strappy stripper heels of my version of the President of the United States, and I'm most definitely having fun.

The Boss of the Third Street Saints has done mighty well for herself (or himself, depending on what type of derriere you want to be staring at for hours upon hours of gameplay). I'm not going to spoil any of the plot, other than to say you play as POTUS, Earth has come under attack from aliens, you get imprisoned in a computer simulated world, and this gives you super powers. Because science.

All of these little plot points have been known for months. Now think about it. This is the stuff that Deep Silver and Volition are readily letting us know. Can you imagine what they're not telling us? I mean, I can, but I'm living the American Dream --and that dream is to be Commander in Chief, have access to a godly arsenal of bizarre weapons, nigh invulnerability, have mother@#$%ing super powers, and most importantly, stripper homies on call.

But don't take my word for. Listen to Mr. Terry Crews:

To make things even more ridiculous, Game, a UK game retailer, is offering an exclusive (as in only one) $1,000,000 SUPER DANGEROUS WAD WAD edition. I have no idea why it's not listed in British pounds. I also don't know why it's from a UK retailer and not based in the juggernaut of vomitous spending that is the good old USA. Here's what you get for your one mil. Oh, I'm sorry. Are you too poor to read the small print? Here you go:

7 nights at the Top Royale Suite at the Burj-Al-Arab, Dubai

A week for two at the Jefferson Hotel in Washington DC

Is this a simple PR stunt? You betcha. It's the kind of stupid gaudy thing that makes me wish I had so much money that I no longer understood how it works. Then I would buy things like this and all the air in Antarctica. Because why not?

I would like to point out that even after spending a million bucks they won't include future DLC. What the hell is up with that? Probably have to drop $40 more bucks on a season pass...

Saints Row IV supports two player online co-op. It will hit store shelves on August 20th and it's available for the Xbox 360, PlayStation 3, and PC.