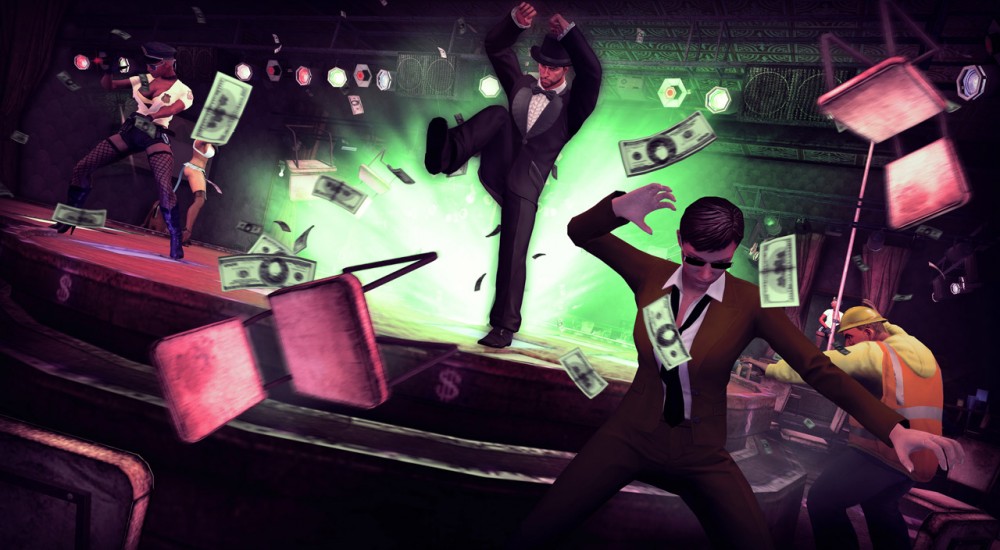 As a Saint, you've worn plenty of different hats over the years. Whether it's taking fashion tips from anime characters, embracing your inner caveman, or taking Talk Like a Pirate Day way too seriously, every Saint has always kept to one unyielding rule. There ain't nothin' in this world more important than money. You know. Dosh. Scrilla. Benjamins. Chedder. Dolla-dolla bills, yo.

Instead of blowing people to Kingdom Come with a stomp, why not make friends by giving them money from the sky? The Make it Rain stomp guarantees reelection as you shower the populous with an ample supply of money. If you aren't looking to make allies, use the Midas Touch buff which turns nearby enemies to gold. The Shakedown Telekinesis lets you grab an investment banker with your mind and shake all of their stock earnings right into your bank account. Finally, the Bling Blast takes all that hard earned money you got from shooting people in the face and warps it into pure destruction. All of this can be yours for $3.

Hey, Mr/Mrs President? Maybe you should redirect some of that money towards our broken economy. That'd really help out all us little folks.

In addition to the Bling Bling Pack, the results from the Community Costume Contest are here! They call it "Reverse Cosplay," which sounds like just being yourself. Check out the trailer below.

Alright! Two new custom costumes. While the Genki Astronaut really fits in with the outlandish wackiness we've come to expect from Saints Row and also Professor Genki, I've gotta give my money to the Freckle Bitch delivery girl. You can tell by the "Freckle Bitch"  written there on her arm that she's a real classy lady. These two swanky outfits are straight up free DLC.

Two additional pieces of DLC, both available for $2.99 are the "College Daze," giving you access to Frat Boy and Sorority Girl outfits, complete with a beer hat and a new scooter. The second is "Game On," allowing you to dress the Boss in hockey gear, or a golfing suit if you're into hitting balls with clubs. Also included is a golf iron and the "Puck Truck."

All packs are out now on Xbox and Steam. The PS3 versions will be released sometime this week.

Keep on pumping it out, Deep Silver. We love developers who support their games post-launch.