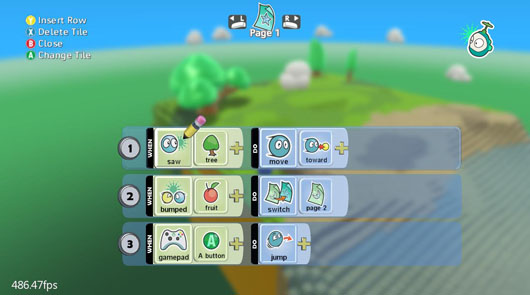 I think it's human nature to want to try to create.  Whether you are creating your own art, literature, movies or games; humans have a switch somewhere in that brain of theirs that makes them creative.  Every gamer at some point as said - "I want to make a game."

For some the learning curve is simply too much for a programming language, or even some of the out of the box solutions like that of GarageGames or even XNA.  Microsoft's next entry into this world is called Kodu (formerly Boku) and it's a visual programming langauge.

Kodu was demonstrated live last night during Microsoft's CES keynote, and it was demo'd by a 12 year old girl named Sparrow (Fable 2 reference perhaps?).  From the looks of things actions are broken down into logic blocks which can be stacked into full routines, think LEGO Mindstorm.  It's tough to say how open ended Kodu is, but we do know there's multiplayer support - so co-op is possible.

Kodu launches this spring on Xbox Live Community Games Channel.  So what do you say, will you try your hand at creating a co-op game?