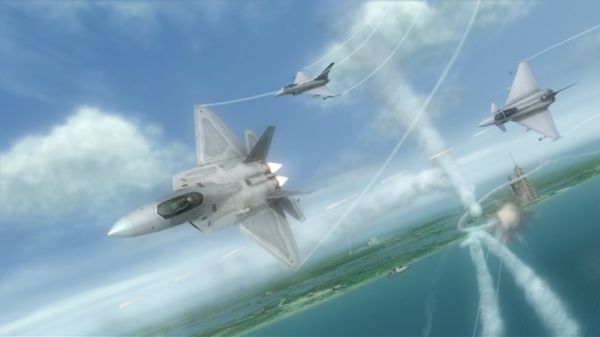 ...the co-op is a really strong feature and we don’t make a difference between the campaign solo mission or the co-op mission.  You just have a campaign, you can start it by yourself and, if you leave the session open, a friend can join you at any time, help you in a mission, the mission will automatically adapt for two, three or four players, but all the XP you get from playing this mission you keep and will unlock the same amount of stuff.

It sounds like they're making co-op a priority -- which is good! -- and using the same cross-mode ranking/experience system that Rainbow Six Vegas 2 featured, wherein any mode played gained points toward the overall record of each player -- also good!

When you play alone you have two wingmen who are former H.A.W.X. like you, but you were their squadron leader.  You’ll be able to give them orders such as defending you or attacking your targets.  When you play co-op everyone becomes a squadron leader, but you don’t have any wingmen.  You have to co-ordinate yourselves.  You are part of the same squadron.

And a bit of positive confirmation for those of you that use flightsticks:

You will be able to use the peripherals on all platforms.  Using the USB ports, you’ll be able to plug your setup in any machine.

While IncGamer was busy with their interview, VideoGamer.com tangled with the game itself. From their extensive hands-on time:

On this occasion our preview time was spent trying out a quartet of missions in four-player co-op mode, a selection that offered a spread of objectives from straight-up dogfighting to defending Air Force One. All of these stages are present in the single-player campaign - and strictly speaking that's really what we were all playing.Having said this, there are certain differences in the way the missions play out when you're flying alongside chums. Before we set off, a Ubisoft dev assured us that this is more than a matter of simply chucking in more enemies, and that the game forces a co-op party to work as a tactical unit to accomplish their objectives

Ubisoft have smartly included an on-screen score chart for co-op missions, so you'll be able to see exactly how many kills your fellow pilots have notched up, along with what aircraft they're using.

Make no mistake: co-op play online will require the use of headsets, and some genuine teamwork.

Reading more into the articles, you'll find claims that the game engine allows players to enter and exit online co-op missions freely depending on the privacy of the host, and will adjust the level accordingly via additional enemies and adaptive AI...which reminds me of a simplified "AI Director" a la Left 4 Dead.

Check out the full articles for details about the plane physics, multiplayer, and more.