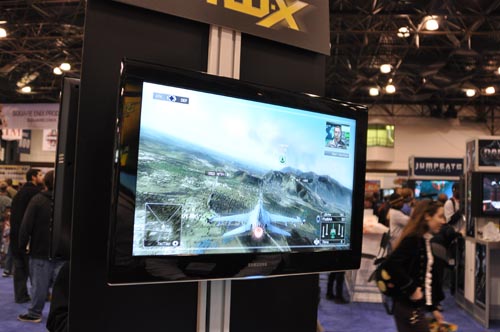 The first co-op game we looked at during the New York Comic Con was actually the best game we saw.   Tom Clancy's H.A.W.X from Ubisoft not only looked beautiful, it played really well too.  Featuring full four player co-op through the entire campaign, in drop-in and drop-out fashion, H.A.W.X. was an easy choice for our game of the show.

The demo on the show floor was available on the Xbox 360 in three forms.  The first was with the standard 360 controller, the second was with a Saitek flight stick, and the third was in this crazy motion based chair.   Oh...right...and the chair costs $400. H.A.W.X. is more of an arcade title, in the sense that it gets away from some flight simulator aspects.  You can still stall the plane, and there's still real world forces acting upon you, but it's quite easy to pull off some crazy maneuvers.  I really enjoy watching people pull a quick turn with the plane by slamming the breaks, reversing the thrust and pull hard in the opposite direction.  I'm not sure how realistic this is to pull off, but hot damn if it didn't look cool.  There's even subtle effects on the plane showing it breaking the sound barrier.

You'll find yourself thrown into numerous battles with plenty of enemies, and you'll be taking them down fast and furiously - no Vin Diesel required.  One common problem people have in flight games is tracking your target.  In HAWX you can enter an "intercept mode" where your HUD displays blue gates which lead you on an intercept course with your target.  It's an adrenaline filled ride that usually puts you smack dab behind your enemy for a quick kill. Another great feature in HAWX is the camera assistant.  This feature, like the intercept one, allows players to easily locate an enemy in their surroundings.  By double tapping the right trigger the camera will zoom out to a 3/4 isometric view, thereby giving players a much better view of their surroundings.  It was quite easy to then maneuver and avoid incoming missiles, locate targets, and get your bearings.  In fact, I watched someone play through the entire tutorial mission without ever exiting this mode.

Using the joystick was quite fun, and added to the sense of immersion, though the lack of force feedback was disappointing.  The 360 game pad worked well too, and I never really felt like I was fighting the controls.  My partner in crime tried the aforementioned motion chair, and lets just say your money is better spent elsewhere.

I can't quite put my finger on what stands out the most from the game, other than it was just pure fun.  It takes me back to the days of Top Gun on the NES.  It's simple, it's gorgeous, and it's action packed.  The game even has a focus on co-op with the options to start or join it right on the main menu screen.  We can't wait to play some four player co-op in the not so friendly skies.

We took a few minutes of video which we posted below of the game.