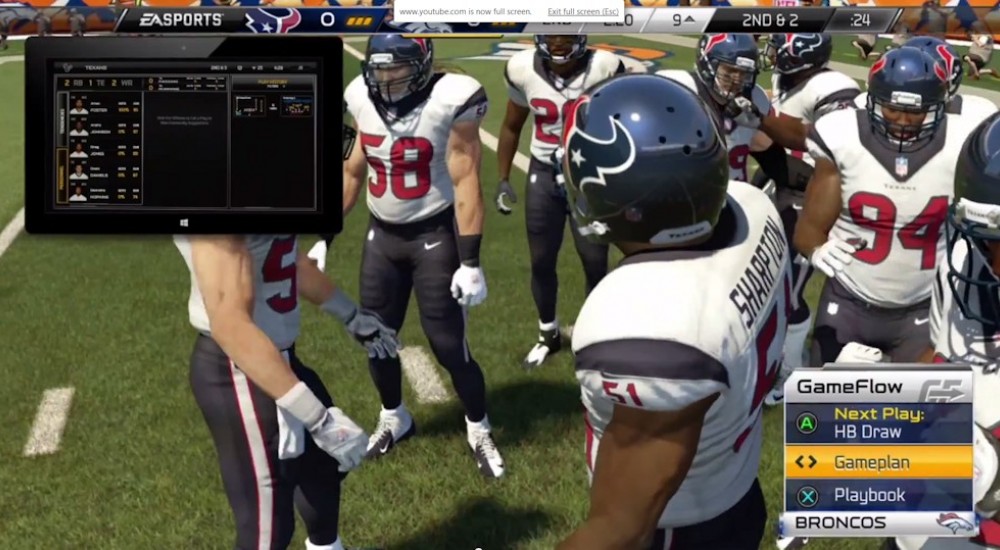 Second screen co-op seems to be one of those next-gen features that everyone wants to implement, but nobody is really sure if they are going to stick and take off. While not a traditional form of co-op play, these modes allow a one or more additional players to utilize a tablet or phone to somehow enhance the primary player's experience. The latest game to give this a shot is Madden NFL 25 from EA Sports on the Xbox One.

We've got a co-op in your co-op kind of thing going on here with Madden 25. Let's talk first at the basic level. Using Coach Glass and the Xbox One you'll be able to have a second player assume the role of a defensive coordinator not only calling defensive plays, but analyzing the opponents tendencies, getting real time stats on success rates, and a ridiculous amount of other detail that a hardcore football fanatic would love.

On top of that level is a community level of co-op play where the play calls will be pulled from the cloud based on community tendencies so you can see how your calling not only differs from most people, but get an idea of what play you should be calling.

Madden NFL 25 will be out when the Xbox One launches on November 22nd. You'll need the Xbox Smart Glass App and a compatible devices to utilize it.

Most sports games have an inherent co-op mode in them, whether it's just a quick exhibition game where two local players can play against the computer or something more in depth. We tend not to add every single sports game to our database - instead we wait for an explicit call out to co-op or something unique like Coach Glass.