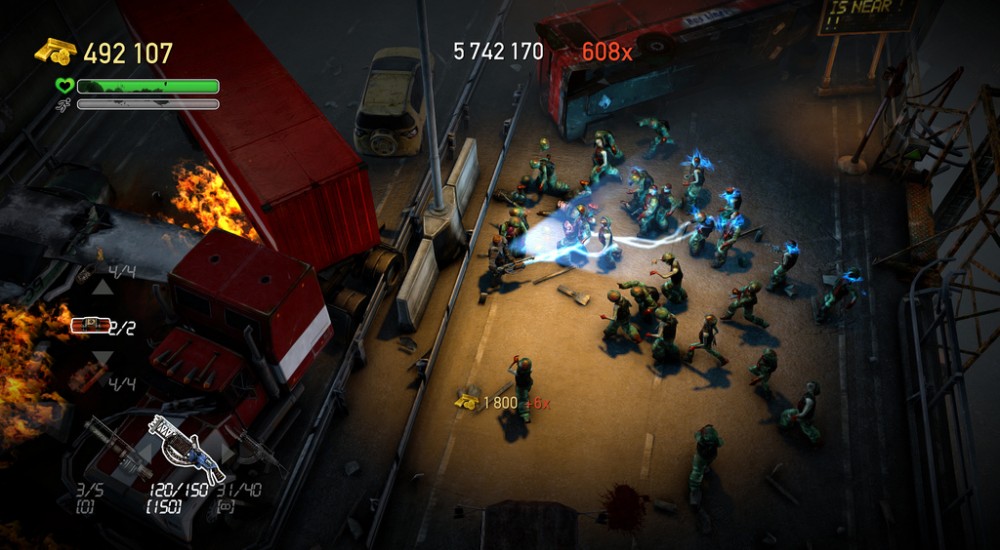 The PlayStation 3 had a solid list of downloadable co-op games, one of which was a title from Super Stardust HD creator called Dead Nation. Having cut their chops with the PlayStation 4 launch of Resogun, Housemarque moved on to polish up their previous PlayStation Network title.

Dead Nation: Apocalypse Edition includes the Road to Devastation expansion that came out for the original game. The game also features updated textures and rendering effects, 1080p resolution, and controller tweaks like quick weapon selection. Perhaps the biggest and most ambitious addition is something called Broadcast mode.

In this mode, you can stream your game to the masses interactively, and your viewers can influence the difficulty of your game. Periodically all your viewers, whether they be on PS4 or a web browser, have the option to vote between a positive and negative effect that occurs in your game. There are a total of 30 different voting effects that can occur, ranging from spawning zombie packs to giving the player ammo, or even disabling the player’s ability to sprint. But don’t worry; as a player you can get back at the masses, because voters will appear in your game as named zombies for you to exact your revenge on.

I played a bit of the updated game the other night and the visuals are definitely impressive. There's a noticeable improvement in lighting and textures from the PlayStation 3 version, though the character models seem to remain identical. I also tried out the Broadcast mode, jumping onto another player's stream. Certain segments allow you to "participate" choosing between two options. Users on the web can simply type "#A" into the chat to vote and then the game choose the appropriate event.

Dead Nation: Apocalypse Edition features two player local and two player online co-op. The game will set you back $14.99, but PlayStation Plus users can get the game for free during the month of March.