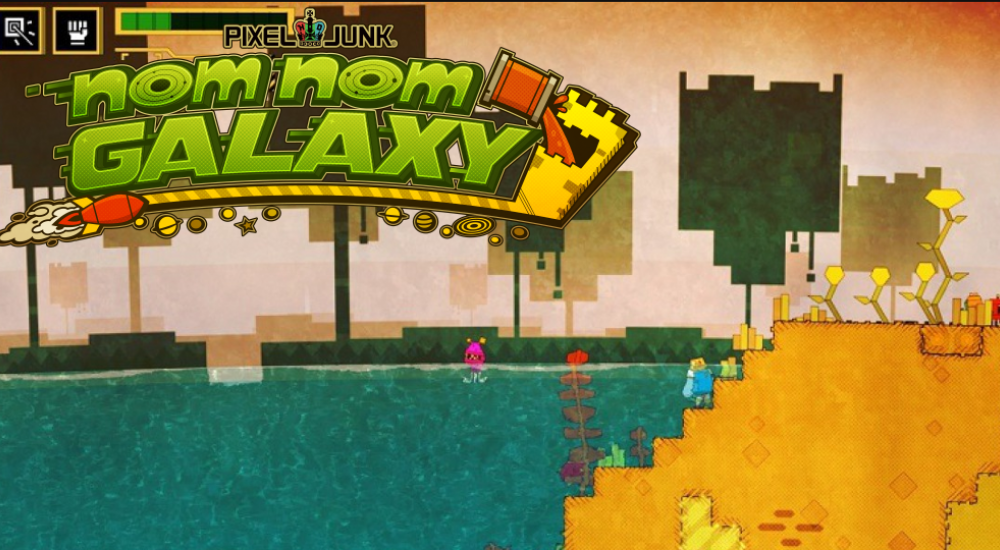 What was once PixelJunk 1-6 became PixelJunk Inc. Now the wacky survival sim has changed names once again, this time for good. Nom Nom Galaxy is Q-Games' latest effort, and it's not quite like any of the team's previous releases. This one's all about making soup. From farming to hunting to building to lasering the countryside, it's your job to keep the soup flowing.

Even though the idea sounds completely off the wall, there are some very recognizable elements in Nom Nom Galaxy. Each explorer has two types of lasers at their disposal: one that melts things, and one that creates things. PixelJunk Shooter-ish, yeah? The overreaching goal of the game is to build your factory and base, keep enemies at bay, grow and harvest plants, then turn everything you can into a sellable soup. Pipe the substance around the factory as you manage things like income and power supplies, all while running around a lovely 2D world with a bunch of other explorers.

Making soup is difficult work. Making games is, too. To illustrate that, Q-Games has prepared a nine minute long trailer that illustrates just how awkward the whole process can be. Watch it to see a chef dump Star Fox into a pot of water, along with a PS3, "Mr. Move", and some other random items. There's some gameplay footage spliced in there, so be sure to watch it for the sawblade vs. mammoth action.

Nom Nom Galaxy is heading to Steam Early Access on March 13th. The trailer above emphasizes that the game is still very much in development, so don't get all weird if the soup tastes less than stellar. Co-op has been reported to support four players online and two locally via split-screen.