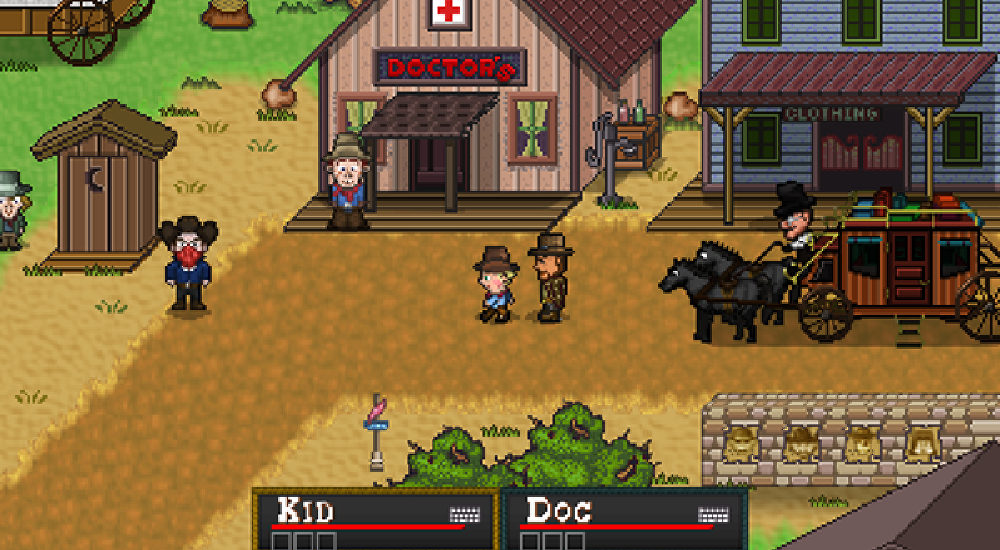 Most of what makes Boot Hill Heroes appealing will be familiar to anyone who's played an RPG in the past 30 years. We've got battles, we've got equipment, we've got towns and maps and exploration and experience points, like you do. There's also a curious job system that relies on hats, allowing players to customize character abilities to match their playing styles.

The really crafty thing about co-op is that players don't interfere with each other during play. If you think back to co-op games like Secret of Mana, whenever someone wanted to check a weapon stat or whatever, calling up the inventory essentially paused the game for everyone. Here, however, that just isn't the case. Menu screens pop up as small windows, which allows people to fiddle to their heart's content while the other folks stare at cacti or whatever. Combat works in a similar fashion, fusing together turn-based and real-time elements quite seamlessly. Nobody has to wait to do their thing, you really are playing this game together.

Boot Hill Heroes is currently on Steam Greenlight hoping to get its day in the PC spotlight. A PS Vita version was recently released, but don't expect co-op on that comparatively tiny screen. To make up for the loss, the Vita version has about three hours of exclusive content. Both the PC and XBLIG versions feature local co-op for up to four players.