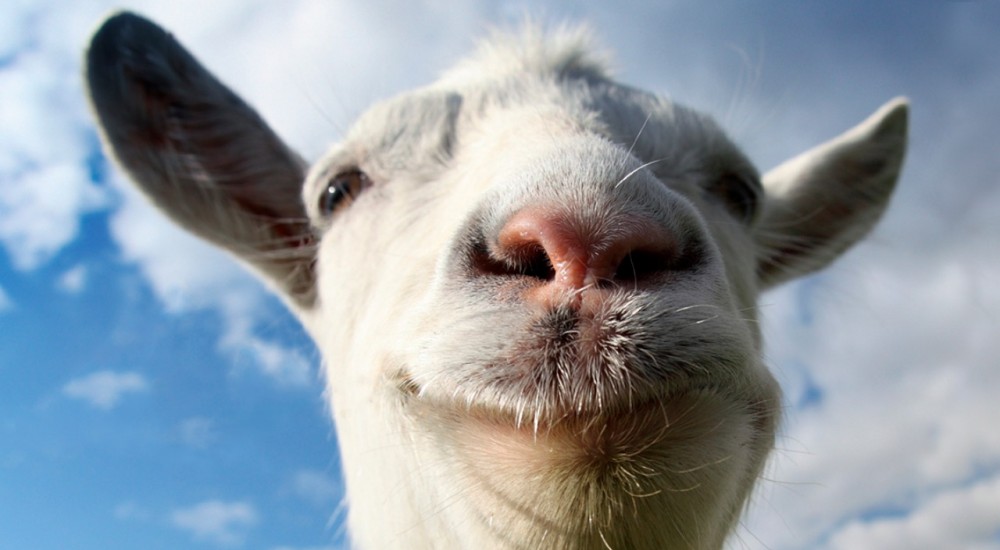 It's been a week since Goat Simulator was released to the world on PC and Steam, and we simply can't get over the sheer ridiculousness of the game. If only we could bring our friends into the mayhem with us...

Announced only a few days ago, developer Coffee Stain Studios stated that a co-op multiplayer mode would be coming to the game in its first big patch! The mode will include all of the same silly gameplay mechanics as before, such as obtaining points and multipliers by causing an absolute ruckus, within a split-screen co-op mode. Unfortunately, this means that no online co-op will be offered for the game for the time being. Due to Goat Simulator processing an enormous amount of object's physics using Nvidia's PhysX and Apex technology, Coffee Stain explained that it "would synchronize terribly in multiplayer" and they "would have to rewrite most of the game code from scratch" to have online gameplay function properly. Since the game's physics are already pretty crazy to begin with, it's understandable that having two goats instead of one creating havoc might create some issues.

We also learned that the first update to hit, Update 1.1, will supposedly include an all new level that's around the same size as the original stage. It will come at no cost to us either, as the game devs would rather do unpaid DLC's if possible:

"A lot of people have been asking for DLC with new maps for Goat Simulator, but we would feel bad charging people for DLC content when people can just download new stuff for free from the Steam Workshop," stated Coffee Stain's Armin Ibrisagic, "so we decided to do a free update instead."

The update is said to be out around May, so be wary of both terrifying goats and interesting co-op gameplay to come.