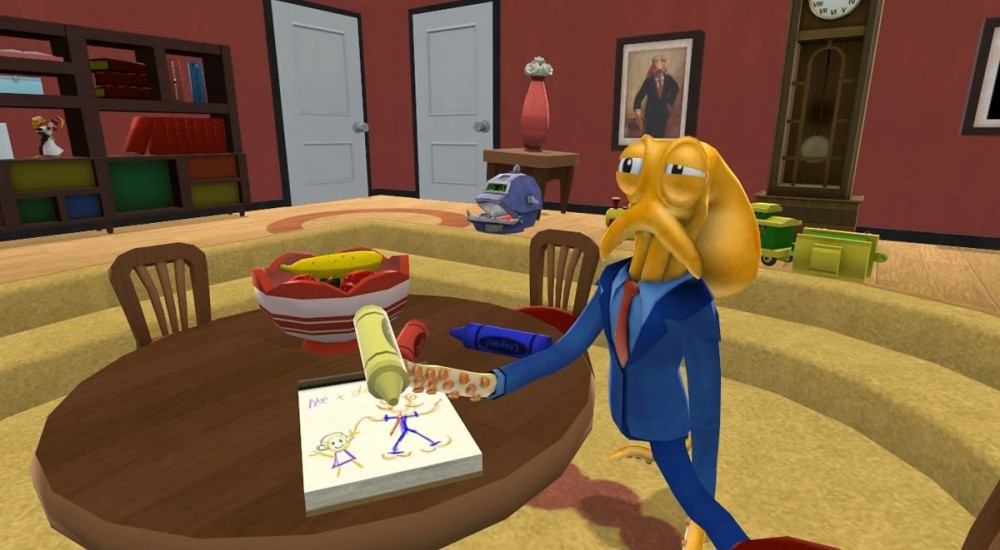 Octodad: Dadliest Catch released on PS4 yesterday, and the game is already being offered a discount for PS Plus membership. The game might just suck in both you and bunch of friends for a wacky co-op session.

Since the game is now on PS4, console gamers can see what all the fuss was about this silly indie title when it was released on PC back in January. This version, however, will come with its own assortment of enhancements. For one, each co-op player (up to four, locally) will have their own tentacle to move around on Octodad. PS Move controllers can also be use for this as well for even crazier gameplay. Young Horses co-founder and president, Phil Tibitoski, stated via the PlayStation Blog that there have been major changes made to the "latter third of the game in particular". Adding new challenges such as, "deck swabbing and jig dancing," along with brand new disguises for Octodad to wear.

The game is currently available for $15, but is discounted for PS Plus members at 20% off until April 29th. For those of you interested in the game, but rather pay an even better price for it, Octodad: Dadliest Catch is currently on sale via Steam for only $10. The deal ends this Friday, April 25th, at 10 am PDT.

Octodad: Dadliest Catch is a very quirky game that can be considered a hit-or-miss depending on your taste of gameplay. It can be a nice break from the numerous amount of serious co-op titles out there, especially with a couple of friends just goofing around and having a good time. However, it can also be an absolutely frustrating one if trying to get through the game steadily with a partner or two. I do encourage those interested to check out our review for more information on the PC version of the game to get an idea of what I'm talking about.