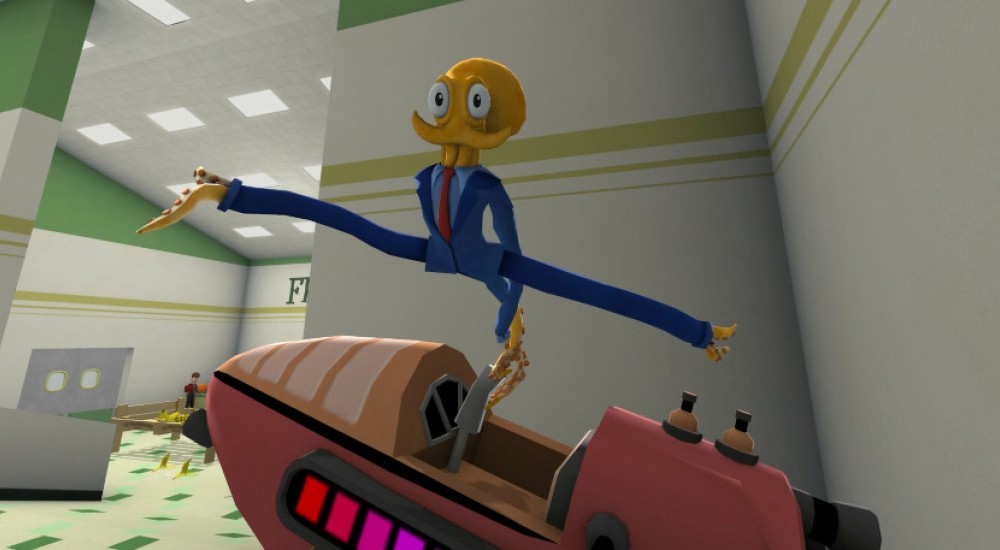 In what could possibly be the first cooperative octopus sim ever, Octodad: Dadliest Catch has launched its PC version with support for four local players. Instead of going all splitscreen or whatnot, each player takes control of a set of limbs, flailing them about madly as you try to do simple tasks like make a cup of coffee or mow the lawn. Hilarity naturally ensues.

Octodad tells the story of an octopus in a suit who's trying to get on in life. Nobody knows he's an octopus, despite the amount of flailing about and tentacle regrowing he does on a regular basis. The single player mode puts two legs (well, tentacles shoved down suit pants) and one arm at your disposal, allowing you to move them in any direction, pick up objects, and sloppily walk around the environments. Awkwardness is what makes it fun, but you have to keep a semblance of normality to, otherwise you'll be found out. Then it's back to the ocean.

According to developer Young Horses, co-op was added to the game about six months ago. It was one of those situations where they wanted to implement the feature, tried out a few ideas and eventually settled the current layout. Four people controlling one octopus, why not?! Eight player co-op was under consideration, which would be absolutely mad in our professional opinion. Young Horses also mentioned that online co-op will not be implemented.

Octodad: Dadliest Catch is currently available for Windows, Mac and Linux with a PlayStation 4 release is in the works. All versions support local co-op, and all buyers should absolutely give it a try. Flip on roulette mode and watch as each player's controllable limbs are randomized after each objective. It's octo-insanity, it is.