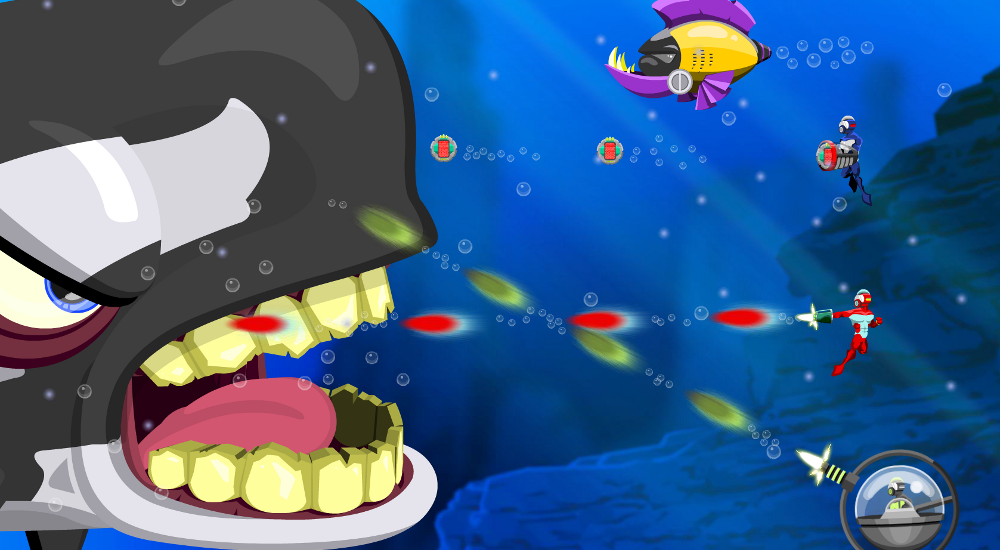 SwimSanity is what you get if Dragon Ball Z invaded the Super Smash Bros. world. The retro-flavored brawler from Decoy Games puts you and up to three friends in the tight trunks of the Moobas. They're armed with lots of epic weapons, but it's up to you to determine if that's enough to defeat the waves of undersea baddies.

Swimming freely in the sea is anything but placid in this game. Something is always trying to kill you, whether it's a speedy squid, a hungry shark, or that screen-sized whale that needs to see a dentist. Your weapons come from pods on the playing field that must be blasted open. Collect rapid fire boosts, shields, mines and all sorts of other offensive items to see if you can keep your edge. If all else fails, a limited teleport ability can get you out of trouble, or you can just save up to unleash the dramatic swimsanity ability!

SwimSanity is packed with both cooperative and competitive modes, just about anything you could want from a multiplayer shoot-fest. The basic co-op survival mode lets you and your friends defend against waves of attacking sea creatures. Each person only has three lives, so you actually have to protect each other. Chase throws you in a tunnel with a whale chomping at you from the left side of the screen. Protip: run. Or, swim, I guess. There's also capture the flag modes, escort the package, tower defense, find all the damu, defeat the beast and more. Like we said, just about anything you could want!

The current pre-alpha version of SwimSanity only supports local co-op, but online is planned for the future. It also requires each player to have a gamepad, preferably an Xbox 360 controller. The two-man team is seeking funding on Kickstarter for the next several days, so if you're interested in preserving the non-sanity of it all, you know what to do.