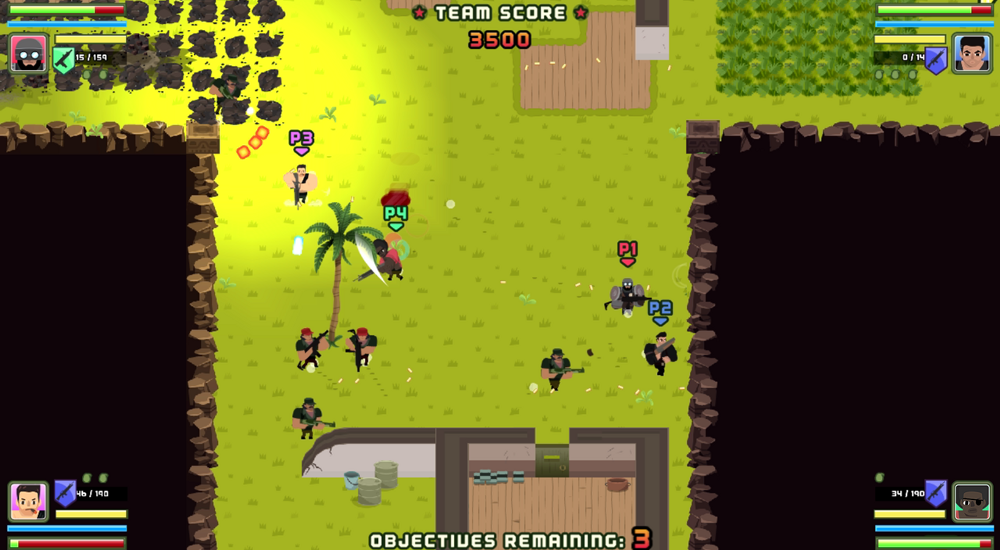 Hey look! It's a cooperative twin stick shooter with a description that doesn't include the words "gritty" or "World War 2"! Tango Fiesta from Spilt Milk Studios is a wild and colorful parody heading to Steam Early Access June 4th. It's got fully destructible environments, procedurally generated levels, online co-op, and a character named Bionic Cop. That's basically all we needed to know.

The idea behind Tango Fiesta is a cheesy '80s action movie coming to life. John Strong, a hero's hero, is joined by three badass bros as they attempt to smash everything in sight, both enemies and scenery included. Also one gun at a time, as the heroes of Tango Fiesta can arm themselves with assault rifles, shotguns, grenade launchers, uzis, knives, and possibly even sharpened sticks. Everything you'll need to take down whatever evil force threatens the planet!

The development studio calls Tango Fiesta an arcade action "rogue-lite", but the trailer only shows of the explosion parts of the game. Which, admittedly, we're ok with. The XP and upgrade system are planned features for the future, along with more heroes, more weapons, more bosses, and pretty much more of everything the Early Access release launches with. Co-op play will support four players locally or online.