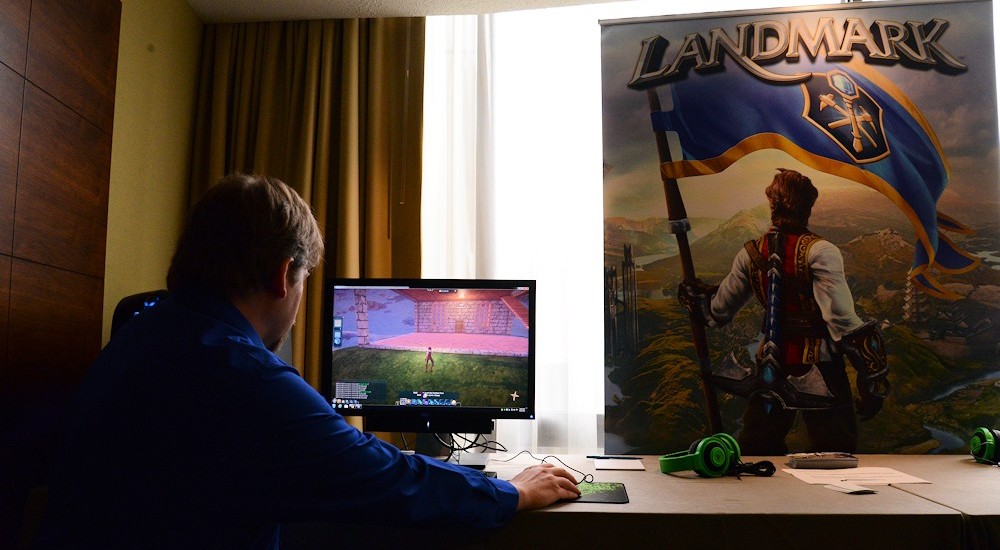 Let's face it, Minecraft started a revolution. As we've made our way through E3 this year there's been a very strong recurring theme of player driven content to both extend and shape a game. A game this is most evident in is Sony Online Entertainment's Landmark, an MMO who's sole purpose right now is content creation.

Landmark was created as a spinoff from the development tools used to build the new Everquest. The developers of the game found the tools so fun and poweful, they wondered what it would be like to put those in players hands. While Minecraft may have made "voxels" popular again, Everquest and Landmark are showing that the term voxel doesn't need to be gigantic squares. Voxels in Landmark vary in size and purpose, but instead of giving players ONLY blocks to build with, Sony has instead offered tools that combine these into things like walls, spheres, beams, and more. But once again these don't need to be flat, blocky creations. Tools within the game allow players to carve smooth looking surfaces from the blocks. The very first thing we saw during our demo was a giant elephant sculpture sitting in the vast landscape. The detail on it was amazing and it clearly didn't have that "built by LEGOs" look seen in other games.

We were told this elephant was a player created object, actually one of almost 100 that won a recent contest to be featured in the game's starting zones. SOE wants these player creations to be the very first thing new players see. The objects created could have been from any theme, the game isn't limiting players to only fantasy or sci-fi. Players have created items in both already, all crafted from the same materials everyone gathers from the procedurally generated landscape.

"It's all about walking through other people's imaginations."

Right now Landmark is in an early closed beta phase, so several core elements are missing. There's no combat, there's no AI NPCs, and no questing system. The goal of the game as it stands is simply to explore, gather materials and build in a social cooperative atomsphere. After staking claim to land, players can invite their friends to build on it too. There's a strong focus on co-op in every aspect of the game. There are bonuses earned for gathering resources with friends or finding rare treasure chests buried deep within caves with your co-op partners.

If players don't want to create something from scratch, there's an extensive online database of pre-built templates players can choose from. Need a castle for your plot of land? There are dozens to choose from, provided you have the resources. These are all added to the store by a player curated system which allows the best content to be predominately displayed.

As Landmark progesses and systems are added for combat, AI, and other "game" features - the creation system will also enhance. Tools will be implemented to allow players to craft their own AI behaviors, create quests and stories, polishing off the MMO experience. All of these things will be marketable for players. Content creators can place their goods on a market and sell it to those players who may not be as artistic, or well versed in the AI tools. Those players can then in turn craft their story or game to their liking. The money for the transaction goes to the creator and SOE in a 60/40 split. From what we've seen Landmark is still incredibly early. The ambitious title has high aspirations for itself and its community. Whether or not everything falls into place to create a game that's fun, engaging and keeps players coming back for new content is yet to be seen. We heard some great ideas for the game, many which we hope see the light of day.

Landmark will offer a more extensive beta later this year on PC and is available through Steam's early access program.