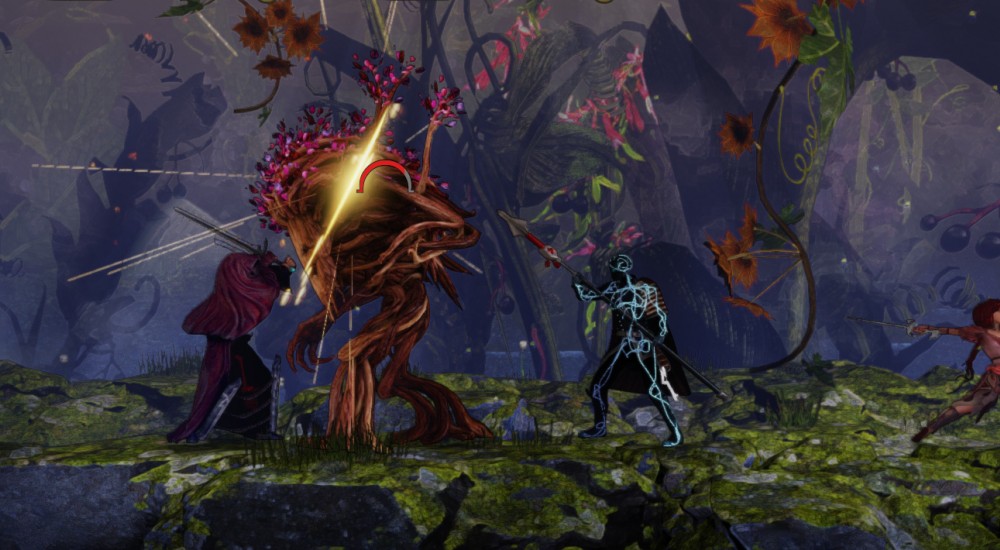 The Chilean based development studio, ACE Team, has put out quite the intriguing repertoire of games. Their latest venture, Abyss Odyssey, moves into the world of fighting games - with its own twist. Players will select one of three fighters but rather than fight against other players, they'll team up to explore a randomly generated dungeon.

The underlying premise behind Abyss Odyssey is that a warlock has decided its nap time but, as is so often the case with sleeping warlocks, his nightmares are turning into real monsters. So what else is there to do but battle through them all to go wake him up? Just an average week for some folks, but I can see how it could be a big deal.

It's not just the story that's unique, though. The game is an interesting mix of fighting mechanics, RPG and rogue-like elements, and what appear to be a couple ideas from the GBA series of Castlevania games. For the fighting aspects, all characters and enemies have a particular set of moves, like a fireball or uppercut, that can be chained together in a combo. The enemies also have an A.I. that knows how to utilize them that way, so each fight, whether its with a simple skeleton or a massive mythological beast, feels a little more like a one-on-one bout. Once an enemy is defeated, the three characters in the game can also capture the souls of defeated enemies to temporarily turn into those enemies and use their moves. All of this takes place in procedurally generated levels that have platforming elements like spike pits, slick terrain, and moving pieces of earth.

To add to all of that, the entire game offers two layers, essentially, of co-op. The main campaign can be played with one other person, who is free to drop-in/drop-out of your game, either locally or online. If you manage to make it all the way to the final boss and defeat it, this contributes to the overall community victory. Each victory shatters a piece of the boss' mask and the more that is shattered/revealed beneath, the more content is unlocked for the game.

I'm not sure if I've ever heard of a game that has so much going on, and still sounds/looks like it's fun to play. Fortunately, there's not too much longer to wait. Abyss Odyssey arrives next Tuesday, July 15th, on Steam and is available at a pre-order price of $9.99 (which also includes the game's soundtrack). The game will also see release on PSN for the Playstation 3, and on the Xbox Live Marketplace for the Xbox 360 and will be sold at the regular price of $14.99.