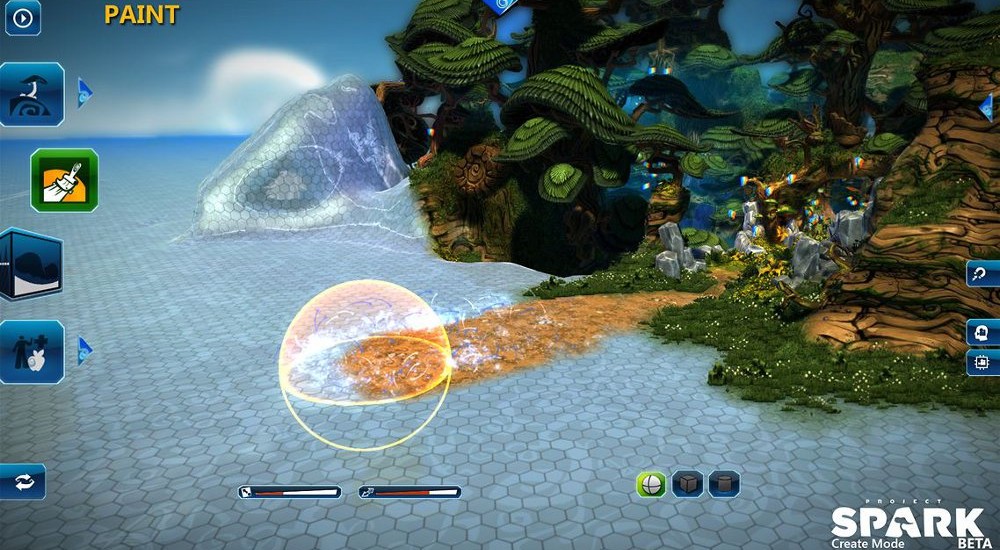 Project Spark is a mad scientist's dream. The game is one part creative playground, one part game designing tool that uses a simple interface to let you shape a world from the ground up. Better still, you get to add behaviors to creatures in the environments, building a living worlds you can share with other players.

The basic idea of Project Spark is sort of a collaborative creation tool. You can work with other people to build a world, designing something as simple as a peaceful park or as complex as a game with enemies, obstacles, allies and spells to unleash. The toolset lets you change just about anything you want. Even creature behaviors are essentially a drag and drop affair, allowing you to install "brains" that dictate an object's behavior. Once you've got something worth looking at, you can drop down and run through the world from a third person point of view, all at the press of a button.

Project Spark's co-op is designed to let players work on the areas of the map or features they find most interesting. Hate sculpting landscapes? Wuss. I'll go do that, you just put that shrubbery next to this shrubbery only slightly higher so you get the two-level effect with a little path running down the middle. Meanwhile our other builders are placing enemies, making castles, setting behaviors, and doing all the in-between stuff we're just too cool to worry about. The end result is a world that feels more complete since multiple minds collaborated on its creation. You can even share and remix levels created by other online players!

Project Spark is currently in beta for Xbox One and Windows 8. The final release is coming this fall and will include the previous platforms as well as an Xbox 360 retail release.