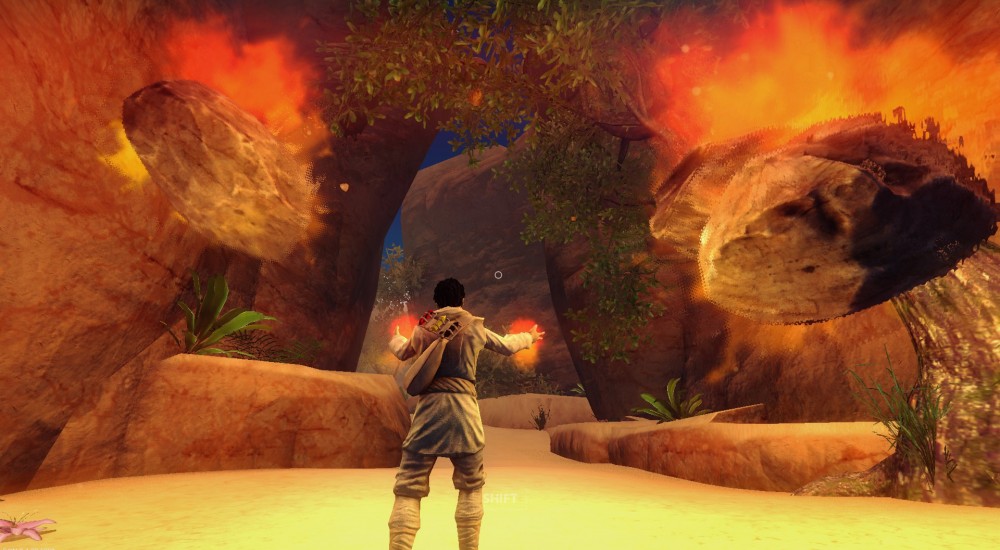 The only humans that remain are secluded in Noshrac, a distant desert world. Humans face total extinction against Sarahul, an enemy from the distant past. In Son of Nor you are blessed by the Goddess of the Night, and it's up to your to save what's left of the human race.

Son of Nor was born on Kickstarter, and is now available via Steam Early Access for PC and Mac, though a Linux version is in the works. Throughout the campaign you can expect to solve puzzels, uncover ancient magic abilities, and engage in third person combat by using the world as your weapon. Why throw a punch when you can throw a boulder?

By combining spells you can uncover new abilities with Spell Fusion. In up to 4 player combo co-op, players can combine abilities with one another to create powerful attacks. Wind, fire, and essence magic are all at the player's disposal to combine and create for combat and puzzle solving situations. Stillalive Studios expects to be in Early Access for about three months, and plans to implement support for Tobii Eyetracking, Oculus Rift, and Emotic EPOC. Early Access includes 4 player online co-op, 2 player local splitscreen co-op, and solo play. Those who purchase by July 31st can score Son of Nor  at a 10% discount on Steam, marked down to $17.99, compared to the full price of $19.99.