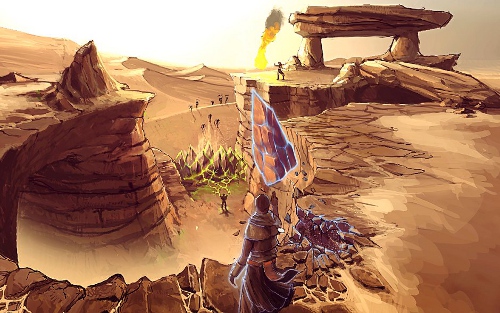 At this point in time, what with all the Minecrafts and Terrarias loose in the world, the words "dynamic" and "sandbox" don't carry the same raw excitement they once did. It's neat putting blocks in places and building cute houses to live in, but how about some meat on those bones, right? Son of Nor, an action adventure game currently in development (and on Kickstarter) by stillalive studios, is shaping up to be a lot of meat.

Son of Nor takes place in a desert world that can be sculpted using your powers of telekinesis, terraforming, and elemental magic. Big boulder in the way? Levitate it outta there. Pile of sand bugging you? Power of Terraform, activate! You can even combine basic elements to create new spells, such as conjuring a bit of fire and a bit of wind to make a fire tornado. Eat it, Merlin. Keep in mind that Son of Nor isn't looking to be a Minecraft clone. This is a story-driven action adventure game, complete with an invading army of bad guys, wild creatures to fight, and plenty of puzzles to solve. Co-op goes well beyond the standard model of "your friends help you kill stuff". There's cooperative spell casting, resource gathering, trap setting, puzzle solving and so much more, all supporting as many as four players online or splitscreen. Many puzzles even require more than one player to solve, such as lifting massive boulders with multiple simultaneous telekinetic spells.

Son of Nor is currently under development and is expected to release Q2 2014 on Windows, Mac and Linux. The Kickstarter project is already going strong, and with ideas as awesome-sounding as these and a team as enthusiastic as stillalive studios, it's hard not to get excited about it.