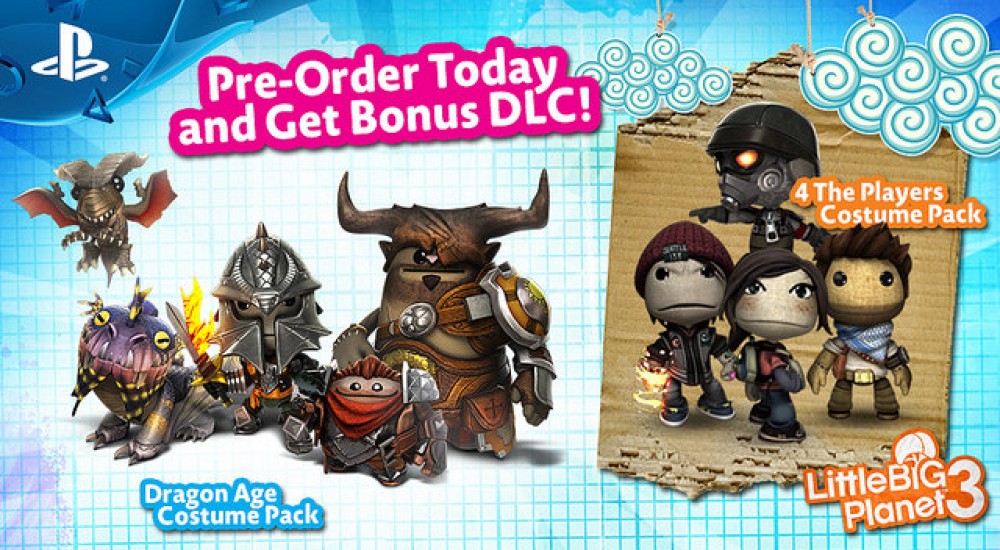 Adding new characters and creation tools to LittleBigPlanet 3 is exactly what the franchise needed to stay fresh. When we saw the gameplay demo at Sony's E3 conference we couldn't help but smile. Previously thought to be exclusive to the PS4, we've recently learned that LittleBigPlanet 3 will also release for PS3 at the same time, on November 18, 2014.

Remember the days when you would pre-order a game and get an actual physical item? Well those days aren't gone yet! Pre-ordering LittleBigPlanet 3 at participating retailers will land you a Sackboy Plush, and if you pre-order at Target, he'll be rocking a Target brand hat. All PS4 pre-orders will receive the Dragon Age: Inquisition Costume Pack and 4 The Players Costume Pack with the Day 1 Edition. These packs include gear for all LBP 3 characters based on the Dragon Age franchise, and costumes for Sackboy and Sackgirl based on favorite PlayStation characters, including Ellie from The Last Of Us, Drake from the Uncharted franchise, a Helghast soldier from Killzone, and Deslin from Infamous: Second Son.

Select retailers will also offer costume packs for all your characters:

The above pre-order bonuses are for the North American region, though Europe will have its own bonuses announced soon. It's safe to say, all of this content may be available via DLC at a later date, but for now your best bet is to pick a favorite pack and hope for the best.