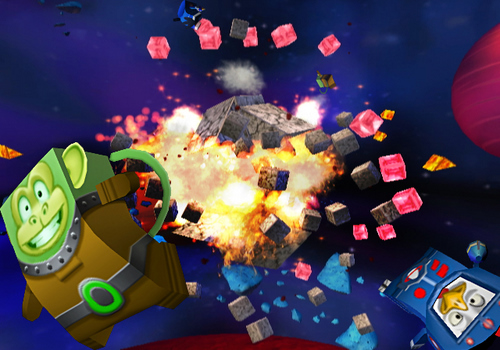 EA and Steven Spielberg are at it again, fashioning a sequel to the surprisingly fun original Nintendo Wii title Boom Blox. Above is one of the first two screenshots, which enticingly promise exotic new locales.

Boom Blox Bash Party is coming to the the Wii this spring, according to producer Amir Rahimi, and it will feature more competitive and cooperative game modes, at least 400 unique maps on launch, and a user-create-map online sharing system that thankfully doesn't require fiddling with Wii Friend Codes.

Will the Nintendo Wii finally reach the standard of current-gen online networking? Almost certainly not. But so far, the aspirations of Spielberg and EA for the Boom Blox sequel may prove unmatched.

Click the "Read More" link for the other screenshot, and for the full press release... LOS ANGELES, Calif., January 29, 2009 – Get ready for the ultimate blox-busting action as Electronic Arts Inc. (NASDAQ: ERTS) today announced BOOM BLOX™ Bash Party for Wii™, the sequel to the critically-acclaimed BOOM BLOX™ game for Wii. EA’s collaboration with director and producer Steven Spielberg continues with BOOM BLOX Bash Party, and the destructive fun reaches new heights with richer multiplayer action and more than 400 new levels that will have players of all ages gaming together and solving action-packed puzzles under water, in zero gravity, and beyond!

BOOM BLOX Bash Party is even more fun to play with friends and family, featuring twice as many multiplayer challenges as the original, and now offers team-based challenges! Players can play with or against friends, solo or in teams, knocking down blocks, destroying towers, slinging and launching blocks and characters, for tons of high-energy, family-friendly fun!

BOOM BLOX Bash Party is packed with tons of new features that are sure to get the party started! The game showcases new block types, including: virus and conveyor blox, new blox shapes, such as: cylinders and wedges, and new tools that will make for even more destructive fun. Players will find twists on BOOM BLOX game play favorites like throwing and grabbing. Players now can also sling, launch, and blow the competition away with new cannon, paint ball and slingshot tools.

Even the characters are in on the action as BOOM BLOX Bash Party features a new cast of wacky blox characters. This time they don’t just cheer you on, they are now blox themselves and you can throw, stack or even launch them, utilizing them to create even more madness and mayhem!

The fun continues online as BOOM BLOX Bash Party enables players to download even more new levels via the Internet. With the press of a button, players will be able to grab, play and rate new levels from EA as well as levels created by members of the BOOM BLOX Bash Party community. Using the game’s easy-to-use Create Mode, players now have the power to share the levels they built with friends, or submit their masterpiece to be shared with the world! The expanded Create Mode lets players build and create like never before, giving them access to the same tool set the EA development team used to create each and every level in the game!

“In BOOM BLOX Bash Party we are taking the game elements to the extreme,” said Amir Rahimi, Senior Producer. “In the original BOOM BLOX, we really focused on perfecting the game’s physics so now we can push the boundaries of physics, offering exciting new challenges and completely new ways to play.”