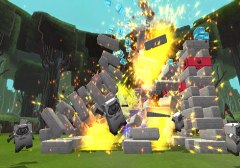 Boom Blox may sound like a run of the mill Wii title, but recent details have come forth that may pique gamers' interest.  The title is the first in a series of collaborations between Steven Spielberg and EA.  Considering the success of Spielberg's last foray in to the video game industry, a certain degree of skepticism about his new game is to be expected.  However, it would appear that Boom Blox discs will not be filling up landfills anytime soon.

The most unusual aspect of Boom Blox is that it will allow for head tracking.  Head tracking, in a puzzle game?  It sounds outrageous, but Joystiq confirms that it is for real. All you need is two Wii remotes on top of your TV, and some form of LED headset.  Head tracking has been included as a sort of nod to Wii modders, and probably won't make the manual, but still, it's interesting to see it included.  You might want to start looking for a wireless LED sensor bar, some duct tape and an old hat.

The gameplay in Boom Blox looks like a strange hybrid of Jenga,  Animal Crossing, and Rube Goldberg machines.  Players will launch a wrecking ball in an attempt to destroy large structures made of, well, blox.  Over 20 types of blox will appear, with all sorts of properties, including, naturally, blowing up.   Added into the action are various animal characters, each with special abilities that will either aid or annoy players as they attempt to wreak havok.  Co-op multiplayer will be featured, allowing buddies to rain destruction down together from the comfort of the couch.  An editor will allow players to build their own creations, and share them with others before tearing them down.

The Wiire reports that over 300 levels will be included in the game.  Boom Blox will hit store shelves in May.