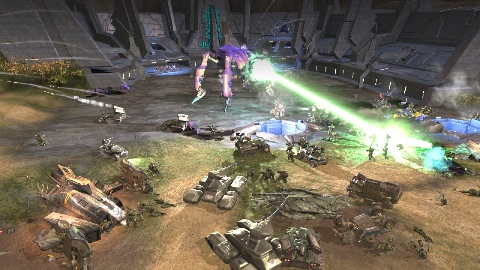 The Halo Wars demo hits Xbox Live this Wednesday, and to wet your appetite several outlets have posted their impressions of the game.

MTV Multiplayer went hands on with the full version of the game, though they only played two missions, which just so happened to be the demo missions.  Their thoughts?  It felt more like a Diablo RTS than a true RTS.  The writer felt the game was a bit more action focused and a little less focused on things like resources and base building.  I'm not seeing this as a negative.

Ars Technica goes a bit more in depth with the overall game and gives the view from 5000 mile style preview.  It's a good way to get your feet wet with Halo Wars.

I actually got my hands on the demo early this weekend and played through all the tutorial and campaign missions available.  Want to know exactly how the controls work?  Read on to find out my impressions and control details. The first thing you'll notice with Halo Wars are the cinematic cut scenes that are beautifully rendered.  While during the missions the cutscenes use the in game engine, between missions you are graced with some of the best looking CGI scenes to date.  They perfectly fit the Halo atmosphere and canon.  You'll be itching to jump into the game, but of course, not before the tutorials.

The tutorials were actually kind of a disappointment as they really don't show some of the subtle touches that Ensemble put on the controls.  You get your basic cookie cutter tutorial here.  You'll miss out on my personal favorite option, the unit queue, that sits at the bottom of the screen.  It's best described in a scenario.

I select all my units with the left bumper and then click the X button on a shield generator guarded by a small group of Convenant.  This issues the attack command and all units start to move.  While attacking  the shield generator my marines are getting pegged by the grunts, so I tap the right trigger which selects the warthogs from my queue and have them "ram" the enemy foot soldiers by pressing Y.  I quickly tap the right trigger again selecting my infantry and press Y on the shield generator causing my marines to launch grenades and rockets.  Boom goes the generator, down goes the shield.

It's by doing this I can not only keep all my units selected, but define individual actions quickly for them in the heat of battle.  On top of these selection methods you can use a "brush" to select the units you want, double click a specific type to select all of them, or use right bumper to select all on the screen.  The D-Pad is used to quickly jump between your base, your armies, and notifications.   It all works extremely well. The base building is a balance of strategy.  Do you want to take in more resources to build more units, or do you want to create technology to build better units.  With only a set amount of structure locations this is where the strategy comes into play in Halo Wars.

All in all I think Halo Wars is going to impress a lot of people.  The demo hints at a game with a ton of depth and replayability - and we haven't even seen the co-op campaign.  With a month to go it's going to be a tough wait.