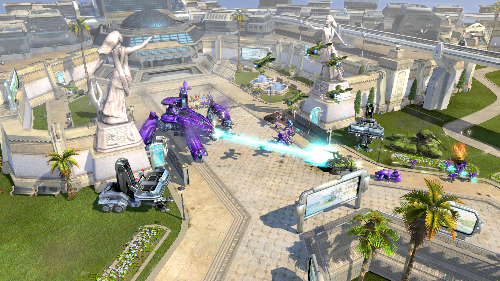 Halo Wars is one of the best games released this year.  It's so good that last week, we chose it as the featured game for Xbox Live Co-Op Night.  A large variety of units, unique missions, and a fantastic control scheme all combine to make Halo Wars one of the the best RTS games available on any system.

Today, you can add even more goodness to the experience.  The "Strategic Options" add-on pack is available today, and is composed of three new modes.

Keepaway Mode: In this “Halo Wars” adaptation of Capture the Flag, teams will battle it out to capture a free-roaming Forerunner Sentinel to score points before the other team. The number of Sentinels needed to win scales with the number of combatants.

Tug of War Mode: Players must build a stronger army than their opponents to succeed.  Defeating enemies is essential, but success is determined by a combination of the army, buildings and resources left standing in the end.

Reinforcement Mode: Players must adapt their tactics and use the ever-changing set of units to outwit and outlast the enemy, all the while facing successive waves of incoming units.

Exact details aren't available yet, but it looks like you'll be able to co-op in the new modes.  If nothing else, comp stomping is always a good time.  Especially intriguing for co-op fans is Reinforcement mode.  We'll check the DLC out and keep you informed!