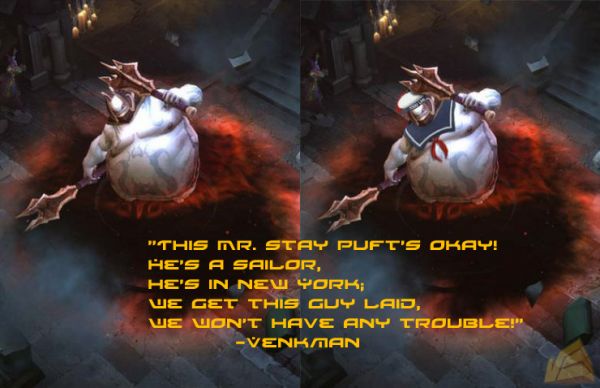 I know what you're thinking – the title doesn't make any sense, but this is very serious business. Fantasy is the theme of Diablo, so why can't the Stay Puft Marshmallow Man make an appearance, or a Unicorn that “dispenses” rainbows as a weapon? These are the "fantasies" of geeks and gamers around the world all rolled in to one! Okay, maybe the Unicorns are pushing it, but I hear if you drink their blood you live forever. Look forward to some awesome bonuses by wiping out armies of baddies with a rainbow burst death-ray, and roast some marshmallows while you're at it!

It may be a farce,  but it's pretty amusing.  I guess Blizzard finally cracked after all the "too colorful" jokes?  Ghostbusters have been a big thing this year, and Unicorns...well, I believe in them, so why can't Blizzard? Blizzards very own representative “Bashiok” put together these (unofficial) images for us, so who knows – an easter egg or two may be hidden within the game, and we like delicious, hilarious, easter eggs.