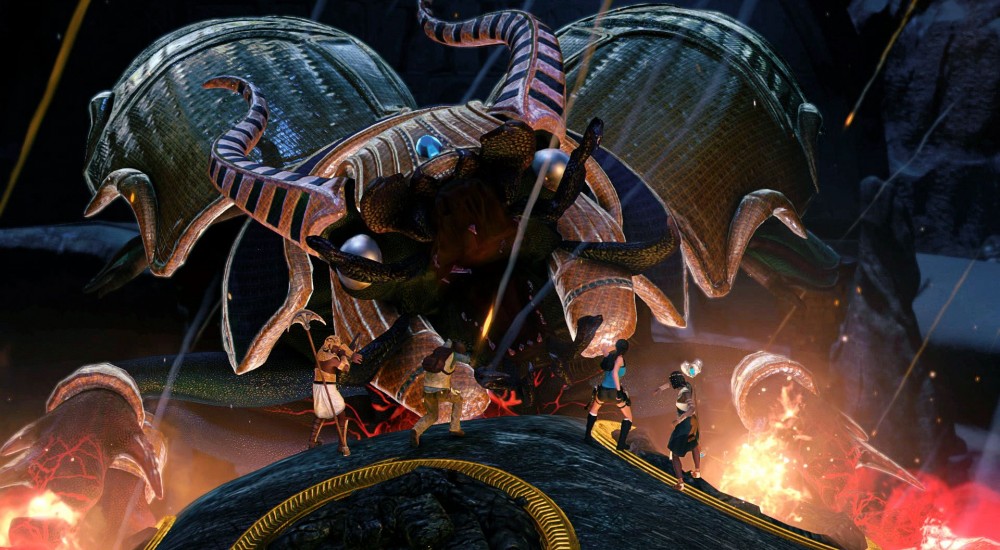 The surprise sequel to Lara Croft and the Guardian of Light is on its way in less than two months, so it's time to start loading coal into the hype train's furnace! Crystal Dynamics recently released a video narrated by members of the development team that lays out the basics of action archaeology with friends.

The biggest change in Lara Croft and the Temple of Osiris is support for four player co-op instead of Guardian of Light's two. New characters have crawled out of their sarcophagi just for this adventure. Joining Team Archaeology is Carter Bell, who is essentially Lara's competitor in the running around being vaguely concerned with ancient stuff field of study. Lara and Carter each have grappling hooks used to create bridges and pull characters up from ledges. They also have torches, but we're pretty sure you know what those things do.

In the other corner we have Horus and Isis, Egyptian gods equipped with some serious weaponry. The gods have shields that protect them from attacks but can also be used as a platform or as a boat to float over the water. They also have the ability to interact with special glyphs found throughout the environment, utilizing them to shift stones around and solve puzzles. It's Egyptian magic, best not to ask too much about it.

One of the more interesting features in Temple of Osiris is that puzzles actually change depending on how many characters are playing. Run in solo and there'll be one switch to stand on. Add a friend and there's another switch for them to stand on, too. This should make scaling for larger teams practically seamless, especially since the game supports drop-in/out play.

Lara Croft and the Temple of Osiris with its four player online/offline co-op is coming to PC, Xbox One and PS4 on December 9th.