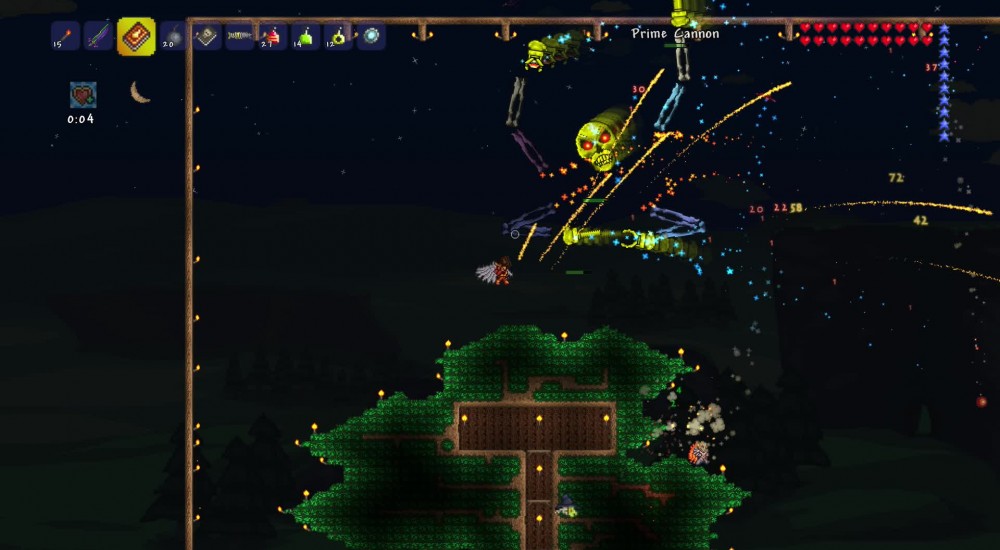 Another year of our lives gone, another year closer to death, another port of Terraria.  Originally released on the PC, the now massive 2D action-adventure game has found its home on a plethora of devices.  Most recently, it's been announced that you and seven other co-op pals can now relive the experience of fighting a glowing, multi-armed space skull on the Playstation 4 and Xbox One.

If, for some bizarre reason, you haven't heard of Terraria, let me paint you a word-picture.  Imagine that you and a couple friends have spent the last few hours attempting to summon to your realm a floating, eldritch eye.  Some of your comrades had doubts about constructing the demonic altar necessary to persuade the creature to cross paths with your dimension, but you were relentless.  At long last, the forbidden task is complete, and the glowing eye lies staring at you.  One of your group, a dissenter from the start, grabs the eye from atop the altar and rushes out into the darkness of night, determined to destroy it.  Your attempts to stop him fail.  Standing there, alone, he raises a fist to the twilight sky, and crushes the nether-being in his palm.  A rumble in the distance startles you.  The ground begins to quake.  You know that the hour for battle has arrived.  Your party retreats to its fortress, a towering iron behemoth constructed through your own sweat and tears.  A gigantic eye, not unlike the one destroyed moments ago, emerges from somewhere in the earth.  Yngwie Malmsteen is also there, and he's playing a ripping solo.  Your showdown begins. Despite the sick tale you just read, you may still be worried about the potential of a scattered player base for a game that's been ported so many times, but fret not!  As long as you're on the PS4 version of Terraria, you'll be able to play cross-platform co-op with PS3 and PS Vita users, and vice-versa.  Unfortunately, Xbox One users will have to be content with creating sweet two-dimensional fortresses with each other.

Terraria hits PS4 on November 11th, while the Xbox One version arrives on November 14th.  You know what you must do.