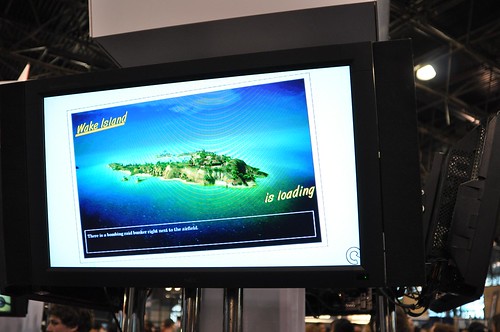 While we got our hands on a ton of great co-op games, I wanted to point out a few other standout titles you guys may enjoy.  First up is the recently announced Battlefield: 1943.  The game is a remake, or re-imaging of sorts of the original Battlefield: 1942 for the PC.

Containing three maps, including the incredible Wake Island, the game will ship for Xbox Live Arcade, PlayStation Network and PC this summer.  That's right, this is a fully downloadable game with a downloadable price.  According to the game's associate producer, Gordon VanDyke, they are teetering between $15 and $20, and it was obvious they were trying to gauge what the press and public thought the value was here.

The game looks gorgeous with bright and colorful graphics and fully destructible environments.  There are some changes here though, namely a regenerative health system and an infinite stockpile of ammo.  So while you'll still find yourself reloading your guns and getting into cover, you won't be seeking out heavy weapon or medic classes to help you accomplish this.  This also means those classes are cut.  Instead you have the Rifleman, Infantry, and the Scout. Explosions are focused on with lots of things that go boomed.

Still retained are the planes that made the first 1942 famous - I know I can't wait for the start of the round plane rushes to take place!  The game controlled well, though the planes felt a little sluggish, and the destructive environments adapted from Bad Company were really impressive.  With 24 player online dedicated server support for all platforms, this is a game that's going to have legs for quite some time.

It's an interesting risk EA is taking with this one, basically a trimmed down, more fast paced version of the Battlefield gameplay for a smaller price.  While some may be disappointed in the smaller map and class selection, if the game succeeds we could see more in the form of DLC.  The game still has quite a bit of time to improve before it's summer release date, but we walked away particularly impressed with it in its current state.