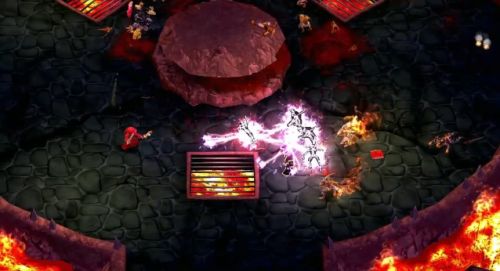 The Humble Paradox Interactive Bundle has launched, and it's got a good dose of Magicka waiting to be consumed. Maybe it's to capitalize on the buzz surrounding Magicka 2's release later this month. Or maybe it's just because cheap games are good. Either way, you can get your hands on some co-op wizard video entertainment software for whatever price you feel like paying. Score!

Available at the lowest, truly pay-what-you-want level are a few single player games along with Magicka, which comes with The Other Side of the Coin expansion and the Horror Props item pack. There's also a platypus robe for Magicka: Wizard Wars. Yes, platypus robe. Like you don't have one hanging on your bathroom door right now.

If you're clever and pay more than the average, you can also get your hands on some other co-op games by Paradox, such as Hearts of Iron III and Impire. Just in case zapping things as multicolored wizards isn't enough to keep you entertained.

Rounding out the bundle's offers are some single player and standard multiplayer games:

There you have it, the Humble Paradox Interactive Bundle. Pay what you want now, as the deal ends towards the end of the month.