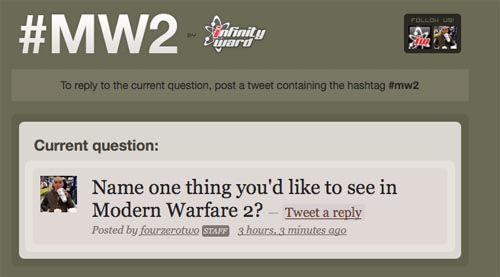 Twitter is all the rage these days.  I have.  Co-Optimus has it.  Even companies like Infinity Ward are using it.  How?  Infinity War are polling the Twitter nation in regards to the upcoming Call of Duty: Modern Warfare sequel and they have burning questions they want to ask.  Up first?

"Name one thing you'd like to see in Modern Warfare 2?"

Using some pretty fancy web 2.0 software, developed by the person who made Cursebird,  Infinity Ward's Twitter app will gather community feedback in regards to their upcoming games and features.  As seen above, they already unleashed a great question, and with that question came a ton of replies.  With those replies came a ton of users calling out for co-op!

Lets hope Infinity is listening to these fans, it appears they are very willing to with such a social undertaking as this, otherwise there's going to be a lot of disappointed folks come this fall when Call of Duty: Modern Warfare 2 launches.