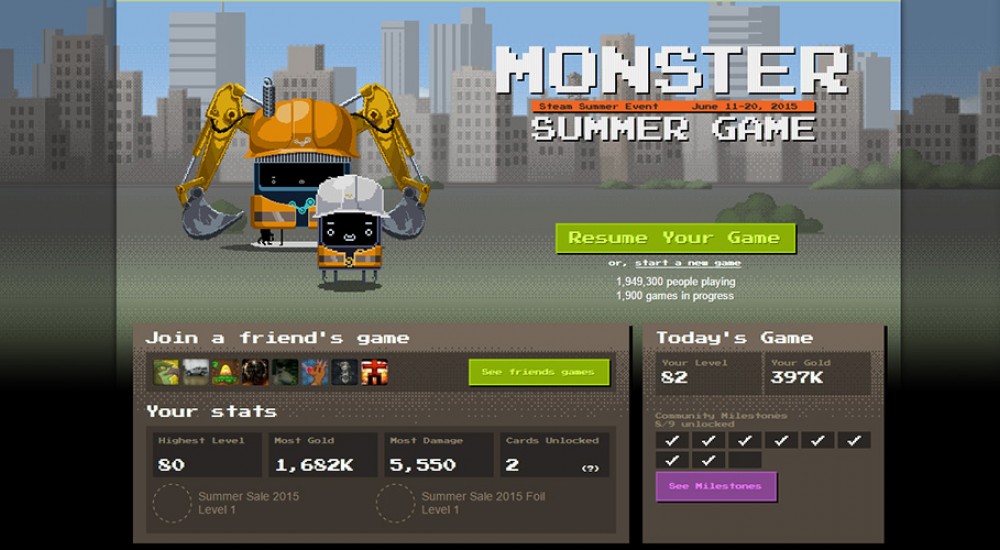 At this point the Steam Sale has gotten so large, it's almost impossible for us to wrangle our heads around the daily deals on cooperative games. There are literally hundreds of games on sale everyday and your best bet is to simply add what you're looking for to your wish list and check that everyday at 1PM Eastern when the new daily sales trigger.

This year's Steam Summer Summer Sale takes place between Thursday, June 11th through Sunday June 21st. Each day during the sale our wallets will be tempted with obscene discounts on games will never likely have time to play. But we'll buy them anyway. I mean, seriously, right now the Homeworld Remastered Collection is $13! Borderlands 2 is $5. And Don't Starve Together is just $10. So about that biggest co-op game ever. What Valve has done is tied the daily deals to a "clicker" style game, but not just any clicker game, it's one where everyone is participating and the aggregate of their progress unlocks deals. But the game itself is co-op too, allowing you to join your friend's games, and in real time, defeat monsters across three lanes of combat.

There's a persistent aspect too where you earn gold, level up, and buy upgrades and items. These items can then be used to help both you and your allies within the game in real time. It's a pretty slick evolution of many of the web games we've seen out there like Cookie Clicker and Clicker Heroes.

As of now there are almost 2 million people playing across 2000 games, which means each game is average almost 10k simultaneous players working together. I'm pretty sure that qualifies it as the biggest co-op game ever.

So grab your wallet, click your mouse, and get ready for tons of great deals on PC games.