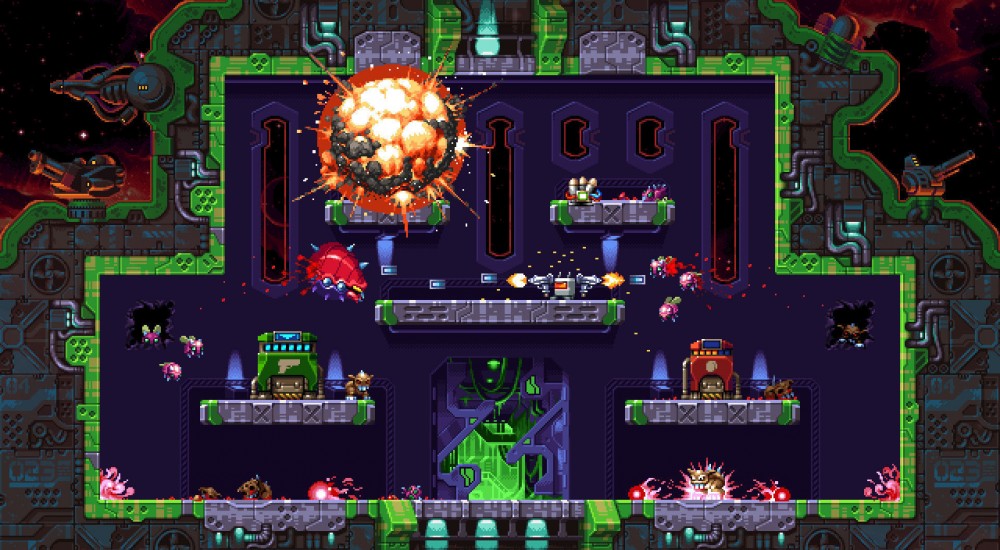 Sci-fi media treats robots with such disregard.  They're there to be used for whatever mundane purpose, and then immediately tossed aside.  It's just not fair!  What if they wanted to become chefs instead of floor sweepers, or floor sweepers instead of mine sweepers?  On August the 20th, you can fight for robot freedom in Super Mutant Alien Assault.  Prove to the world that robots can do all kinds of things, as long as they include slicing and dicing mutant aliens in a ridiculously cramped environment.

Just remember that, should you perform poorly, you're enforcing robotic stereotypes, you jerk.

It won't be a full release, of course.  As is becoming the norm for smaller budget titles, the game will enter Steam's Early Access program as it works towards a full release sometime in 2016.  What is it, you ask?  Well, Super Mutant Alien Assault is a self-branded Super Crate Box clone.  In case you aren't aware of what exactly that is (don't worry, I didn't either), it essentially boils down to randomly generated, high speed arcade combat performed in very tight areas, all in pursuit of a high score.  What it also brings to the table, though, is two player local co-op!  SMAA has already surpassed its progenitor, in my book.  Check out the trailer and see if you agree:

For those wary of Early Access titles, developer Cybernate says the game is 90% complete, and the time spent prior to the full release will largely focus on introducing more content, such as levels, enemies, weapons, and character skins.  If it were up to me, I'd include a mariachi robo-skin, just to prove that no industries are impenetrable for our electronic friends, not even salsa.