Spider-man has had a long and generally successful video game career.  Spider-man for the Atari 2600 was an early game based on the web-slinger, and it was quite fun and addicting for the time.  A whole slew of Spidey games followed, for a large variety of game systems.  The Amiga, PC, NES, Game Gear, Game Boy, Genesis, Super Nintendo, and more all had multiple titles, of varying quality.  With the explosion of Spider-man's popularity after the movies, the wise cracking webhead hit the previous generation of consoles, culminating in what in my opinion, is the finest Spider-man game to date, Spider-man 2.

Co-op has been largely absent from the Spider-man games, however.  This makes sense, in a way, as Spidey is the bee's knees as far as heroes go.  It's the LEGO Indy problem: no one else is as cool as the main guy, right?  The few exceptions to the rule, though, were generally good.  Spider-man teamed up with Venom during the height of the 90s antihero movement in Spider-Man and Venom: Maximum Carnage.  This co-op brawler hit both the SNES and Genesis in 1994.  It was a good game for the time, with excellently detailed, large character sprites.  The cut scenes were taken straight from the comics, and were one of the game's highlights.  The gameplay was a bit tedious, but this was the 90s were talking about, after all. In the current console generation, we have a title very much like that Spidey and Venom game of yesteryear.  I'd go so far as to say Spider-man: Friend or Foe is eerily similar to that classic title.  In Spider-man:FoF , the amazing arachnid teams up with all sorts of characters, good guys and bad guys, heroes and villains.  This tidily solves the problem of "no one's as cool as Spidey ".  Yeah, everyone wants to be Spider-man, but when you can pick obscure and yet awesome characters like Iron Fist, Blade, and the Prowler, it sorta makes up for it.  And that's just the good guys!  Villains like Doc Ock, Scorpion, and the Rhino are all available too.

So why is Spidey teaming up with all these crazy criminals?  It's the old comic book standard: mind control, of course.  When Spidey and a partner free one of the villains from this mental domination (after defeating them in a boss battle, naturally), the baddies are all to willing to join up with the wall-crawler.  So who is the "mysterious" figure who did all of this?  And how can he control the illusion/symbiote hybrids you fight throughout the game?  You'll have to play on to find out... Gameplay in Spider-man: Friend or Foe is quite simple.  When you see an enemy, you mash a button until it disappears.  that's pretty much it.  There are a few combos, and an upgrade system, but there's not much to it.  Enemies repeat, often, changing little from area to area.  You beat up all the bad guys in one area, a door opens, and you move on.  Enemies come in four varieties: small, medium, large, and bosses.  That's it!  The game is about as deep as a ten dollar plastic kiddie pool.  But you know what?  It doesn't need to be complex.  Sometimes, simple is best.  I wouldn't go so far as to call the gameplay elegant, but somehow, it works. 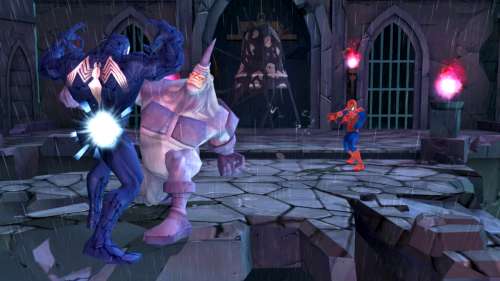 Easily the best part of the game are the cut scenes. The art style is unique, a cross between Fisher Price and the Spider-man movies.  Spider-man's trademark humor is in abundance here, and while the adults may wince at some of the real groaners, the kids will love it and likely be quoting from it later.  (Usually, they'll do this at an inopportune moment.)  There are no real plot twists of any sort, but the interaction between the heroes and villains is fun to watch.

Spider-man: Friend or Foe is the videogame equivalent to chicken noodle soup.  You've had it before, many times, and it's not very exotic at all.  Sometimes, though, it's exactly what you want: quick, easy, and comfortable.  The best part is that the game is now a value title, and can be had brand new for around $20.  If you are a comic fan, have a youngster around who likes Spider-man (that would be any youngster, probably), and are looking for some relaxing gaming, check out Spider-man: Friend or Foe.  You'll be thankful there are so many co-op partners for the webhead, because there's no way that kid is going to let you play as Spidey!