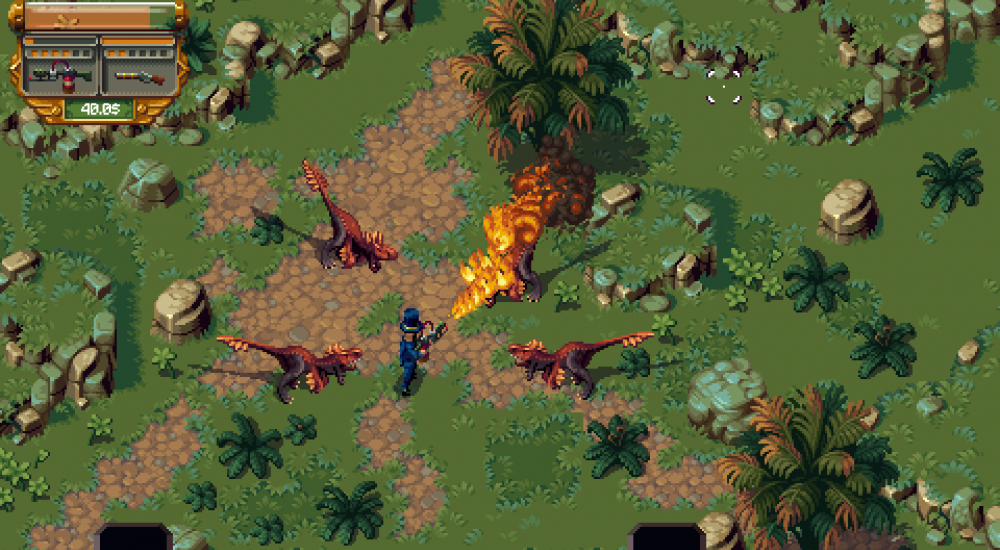 The Roaring Twenties were, by most accounts, a pretty swell time to be alive in America.  Jazz music was growing, women were becoming more important members of society, and it seemed like everybody had plenty of dough to toss around.  The recently funded Tower 57 recognizes this positivity, and asks, "What if, instead of that, everything was awful all of the time?"  As it turns out, the answer looks pretty rad.

Though it fits nicely into the twin stick shooter genre, Tower 57 aims to add a few modern twists and trappings into the mix, not least of which is local co-op.  According to their Kickstarter campaign, developer Pixwerk designed the game specifically with co-op in mind, meaning that playing with a friend introduces a whole new layer of strategy beyond the solo experience.  You and your dystopian cohort will be working together both tactically and through cooperative-specific weaponry and combos, as evidenced below.

The Art Deco/cyberpunk design definitely gives the game a unique vibe, so we're hopeful that the gameplay will deliver.  Pixwerk touts emergent gameplay and destructible environments as vital to their vision, so expect plenty of variation surrounding the points where your team is brutally mauled by their (sort of adorable) foes.

Tower 57 is currently aiming for a full release in the first quarter of 2016.  Be sure to check back here for any updates that emerge in the meantime.  In all honesty, a GIF found on their Kickstarter page sums the game up better than I ever could, so if there's one thing you remember about Tower 57 when it launches in a few months, let it be this.