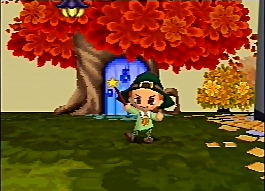 Konami has announced a new game for the Nintendo DS called Magician's Quest Mysterious Times.  The game is a hybrid RPG and adventure game that puts players in the role of a young student at a magic academy.

One focus of the game seems to be on character and dorm room customization, which may give it a distinct Animal Crossing type flavor.  With over 1600 items including clothing, characters, spell upgrades, incantations, furniture and dorm room accessories, you'll be sure to have a unique experience in the game worthy of sharing with a friend.

Yup - the game promises two player co-op play where you can join with other magicians and work through the game.  There will be unique co-op quests, story lines and interactions.  In fact, there's even co-op "vehicles."

The magic broom allows you to travel through each of the game environments much quicker covering more ground or if you play co-op with friends you can all travel together.

So what we have here is a Harry Potter meets Animal Crossing style RPG?  Could be interesting and addictive at the same time - especially with co-op play.  Look for this game in May of 2009.